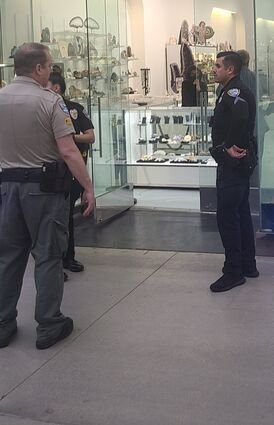 June 16, 2022 - Yesterday evening, a specialty store located in the 1300 block of the Third Street Promenade was robbed of nearly $20,000 in gold by a group invading the store.

The robbery occurred at approximately 7:30 pm when it was still light outside.

Property owner John Alle was right outside the store when he saw the robbery. The store owner is a friend of his. Alle says he saw a Safety Ambassador walk directly away from the situation when he realized something was happening. 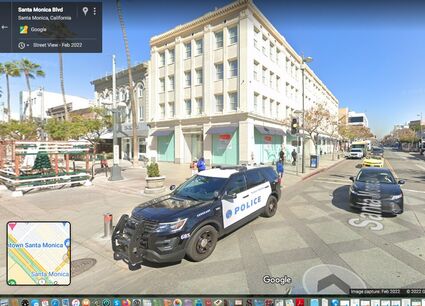 Google image captures Third Street Promenade with a police car in the frame; unknown what crime might have been occurring at the time

Recently, Alle has debated Downtown Santa Monica Inc Board Chief Barry Snell about the effectiveness of the Safety Ambassadors.

The Ambassadors are not equipped, trained, or expected to stop criminal activity directly, but they are supposed to call the police.

Both Alle and the store owner called the police, who arrived within minutes.

Alle said the store owner is “afraid for his personal safety” and did not want to talk to the press. As the owner was leaving his store around 2:00 am, he witnessed what appeared to be a major drug deal occurring on the corner of the Promenade and Santa Monica Boulevard. Alle says there is no police patrol coverage of the Promenade between 11:00 pm until 6:00 or 7:00 am.

While the store owner did not want to be identified, not identifying the location would support that type of protection, but why is there no description of the perps? I'm pretty sure the perps do not live in SM and would not read a paper to begin with, so not offering a description helps no one, but your own woke sensibilities. It must have been the invisible man. Oh sorry, the invisible human.

I have stopped going to Santa Monica for shopping. Too many attacks, NO safety, and now a homeless shelter right next to the pier that used to be a tourist draw. There were MANY other good locations near the StM airport for housing. Such a SADLY DESTROYED CITY