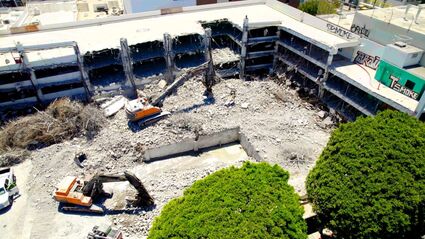 Current state of demolition of Parking Structure 3, a controversial decision

June 24, 2022 - The City of Santa Monica abruptly halted continuing its planned demolition of Parking Structure 3 downtown amid allegations it was not sufficiently protecting the public against exposure to asbestos and other contaminants.

Residents and business and property owners have been noticing large amounts of dust in the air from the city's demolition of its own parking structure. According to local property owner John Alle, air dust samples taken by his environmental engineers showed cement dust. "The all-cement and concrete garage was constructed prior to 1980," Alle wrote in an email. "The cement used at that time contained asbestos." In addition, the wallboard near the elevators and stairwells contained asbestos. When released into the air, asbestos can cause severe damage although sometimes this does not manifest until years in the future.

Alle's attorney, Pantea Yashar, wrote to the city threatening to seek injunctive relief if the demolition was not haulted until the structure could be properly wrapped, as per OSHA, City of Santa Monica, and Air Quality Management District regulations. Yashar's letter pointed out the city itself required the wrapping of a building in the 1400 block of the Promenade recently. 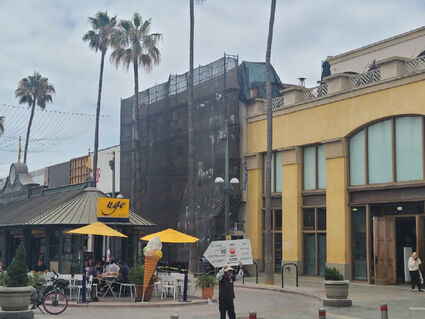 "This is an immediate and significant health hazard," Yashar wrote.

Wrapping the building would add significant cost to the demolition. Alle estimated as much as $100,000.

Alle wrote "People already exposed during the last 3 months (like those shown in the photos and others who work and live Downtown), are subject to breathing in the dust and having it enter the body and affect the heart, liver, spleen, bone and muscles, including lungs, stomach and colon."

The City of Santa Monica prides itself on its sustainability and care for the environment with an entire department dedicated to the subject.

The city plans to use the site of the demolished parking structure to construct supportive housing for the homeless.

Alle reports that work on the demotion project has ceased for the time being.

Hi John, Visible emissions of dust during demolition is definitely a violation of SCAQMD's rules regarding demolition and construction. Can you please provide the air sample results showing asbestos was present in the dust? Or are you just trying to scare the public because you don't like the project? Thank you, Andrew Hoyer CAC 05-3837