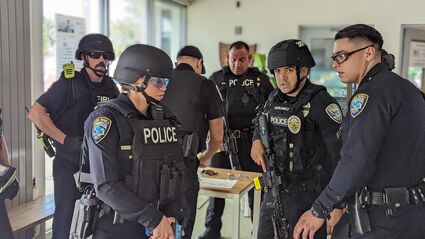 The training exercise was a resounding success with lessons learned by both our police and fire departments as well as our school district participants and community members who volunteered as role players,"

Wrote Lt. Erika R. Aklufi #3619, Patrol Operations Division at SMPD. Below is from the press release written by Aklufi and Flores.

"Training on real properties, such as a local school, is critical for police and firefighters. The best learning environments provide hands-on experience dealing with live simulated scenarios. This intensive training allowed our firefighters and police officers to learn the limits of their equipment and tactics in an educational, non-emergency environment. Through this coordinated training effort, police officers and firefighters are able to hone their skills and sharpen their teamwork in preparation for real emergencies where seconds count." 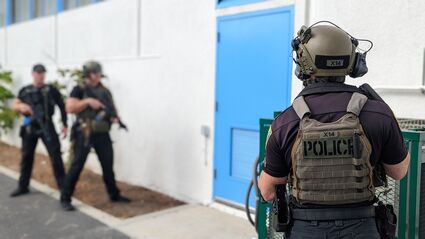 "The Training Cadre utilized simunitions and smoke simulations which look and sound real. Simunitions are simulated ammunition that are intended to allow realistic training using non- lethal projectiles that give off a sound. Many are already familiar with smoke simulations - a product that is used during movie productions and frequently during Halloween. Combined with the help of volunteer actors from the community, we aimed to make this training as realistic as possible to further prepare our personnel in the event of an actual active threat."

"Both the Santa Monica Police and Fire Departments are dedicated to the people we serve and protect. We immediately recognized the potential for passersby and residents to believe a real incident was taking place and looked for opportunities to alert those in the area. In addition to providing the surrounding community with advanced notice regarding the activities, signage and additional staff were placed around the perimeter of the exercise to answer questions from the community."