As Covid-19 Pandemic Winds Down, Mistakes, Exaggerations, and Outright Lies by LA County Public Health Exposed Like Shells at a Beach 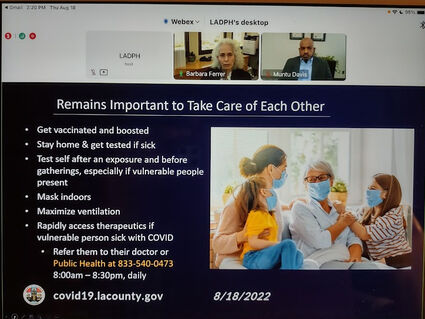 At top of screen are Barbara Ferrer and Muntu Davis, who was there to discuss Monkeypox

August 19, 2022 - In her most recent media briefing yesterday, Barbara Ferrer, PhD, MPH, MEd, Director of Public Health, had increasing trouble maintaining the notion that she either understood the nature of the SARS-CoV-2 virus and the result of the "safety precautions" her office ordered to control it or wished the public to understand.

Rachel Walensky, head of the Centers for Disease Control, admitted a year ago, in August of 2021, that vaccines were not providing immunity against Covid-19 infection. They were only providing some apparent protection against serious symptoms. Since then, Ferrer has consistently implied that mass vaccinations will lower transmission rates in Los Angeles County but been careful to avoid saying such an untruth outright. Yesterday, she crossed the line.

This is patently untrue.

Ferrer was equally mendacious regarding the effectiveness of masks. A reporter from Fox 11 News asked why case rates, hospitalizations, and deaths have been declining despite the fact the public has not been required to mask up. Ferrer grasped for the "collective efforts people have been making" to mask up individually, the few sectors that still require indoor masking, and a handful of stores and offices that maintained their masking requirements as the reasons for the recent decline in transmission.

Really? If a few people masking up in doctor's offices could cause a decline in cases, then why did cases ever rise in the first place? The fact our top public health officer in the county could not acknowledge the obvious cyclical nature of the disease, that is going through its third cycle in exactly the same way as the previous two, gives one significant pause. The only two possible conclusions are she's either stupid or outrageously untruthful. 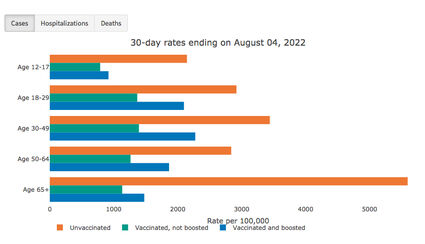 The blue lines represent transmission rates in boosted individuals, which is higher than the rates of transmission in the single series vaccine for all age groups. Photo below shows the rates for the month of June.

Ferrer also slipped up in describing her decisions as coming from political - as opposed to scientific - sources. In describing her "excitement" over the upcoming boosters shots that will allegedly target the Omicron variant, Ferrer said she is waiting for "the White House to let us know" in a couple of weeks if the shots are safe and effective.

It's news to me that the White House has any particular expertise, especially expertise beyond that available to the County Health department itself, who actually have some medical doctors and trained scientists on the payroll (not including Ferrer, who is neither).

The most truthful statement Ferrer made was in answer to a question about whether or not she has ever had Covid herself. She said she has not, but she is aware that people who are careful and take all of the precautions she does have caught Covid despite all of that. "Some of this is luck," she said.