Shark in His Front Yard: Ft. Myers Resident Reports Shark now Swimming Where is Lawn Used to Be Before Hurricane Ian

Sharknado has come to life as truth is stranger than fiction. Storm surge of 15 feet hits West Coast of Florida

A Ft. Myers Florida resident filmed a shark swimming in storm surge on his front lawn on Wednesday, September 28. This after Hurricane Ian came ashore on the West Coast of Florida, with storm surges of 15 feet. 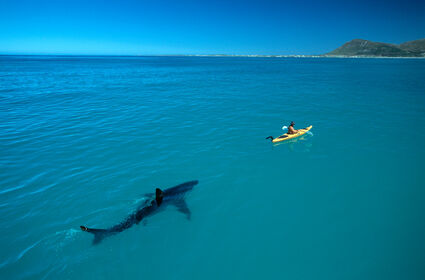 This photo showing a shark swimming in the Caribbean, was the source photo for the image of a shark supposedly swimming on a Florida freeway, below.

Reactions on twitter ranged from "Shit! That's scary" to "That poor shark! Hopes he makes it back out to sea."

"After over half a decade of debunking this hoax every time there was a flood or hurricane," tweeted the Guardian's Ann Lytvynenko, "I can't believe I'm looking at an honest-to-god street shark. Good to finally meet you, pal."

"And traveling alone in the HOV lane, thats definitely going to be a ticket 😂" tweeted Dave.

"Alright... The shark swimming on land is no longer a meme now because it actually just happened. #flwx #Ian" tweeted BGWX.

"I love how there's people freaking out about sharks in the street in Florida, it happens every couple of years." tweeted Thomas, who lives there.