Groups adopting the bylaw included the Queer Caucus, illustrating the dysfunction of "intersectionality" 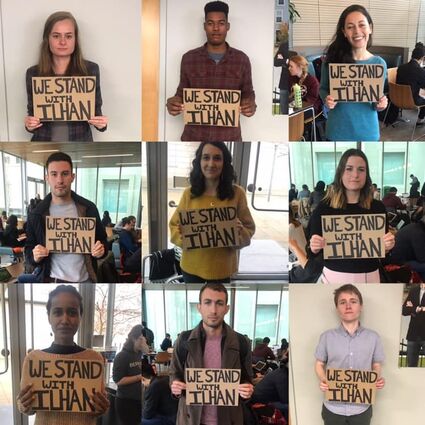 Photo of Berkeley Law Students for Justice In Palestine standing with US Congressmember Ilhan Omar, who has said that the US Congress is in thrall to the "Benjamins" given them by Jewish constitutents

September 30, 2022 - Multiple student groups at UC Berkeley's School of Law began the school year by adopting a bylaw written by the Law Students for Justice in Palestine (LSJP) agreeing to boycott Israel and any entity supporting Israel. In addition, the new bylaw would prohibit the group adopting it from inviting any speaker who "expressed or continued to hold views...in support of Zionism, the apartheid state of Israel, and the occupation of Palestine." The groups adopting the bylaw also pledged to hold a "Palestine 101" training to create "safe and inclusive" spaces for Palestinian students and learn how to properly engage in the Boycott Divest and Sanction movement against Israel.

Israel is the only country in the middle east to support gay rights and where homosexuals can live free of persecution or even the threat of death.

LSJP said that enforcement of the bylaw would be up to each group adopting it.

The adoption of such a restrictive bylaw, which not only prohibits speech in favor of Israel but prohibits speech about anything else that is delivered by an individual who happens to hold pro-Israel views, brought immediate protests by Jewish groups. The Dean of Berkeley Law School, Erwin Cherminsky himself decries the bylaw though he does not believe it violates school policy. Self-identifying as a progressive Zionist, Cherminsky told news outlets that he could see how many students may view the new bylaw as anti-Semitic because "to say that anyone who supports the existence of Israel - that's what you define as Zionism - shouldn't speak would exclude about, I don't know, 90 percent or more of our Jewish students." He included himself as one who would be excluded from speaking. However, Cherminsky argued in a rebuttal to an article in the Jewish Journal that the bylaw does not violate the university's "all-comers" policy, which means that every student group must allow any student to join. "I know of no instance in which in this has been violated or there has been any discrimination against Jews," he wrote.

Kenneth Marcus, founder and chairman of the Louis D. Brandeis Center for Human Rights Under Law and author of the Jewish Journal article, contended that Cherminsky's argument was invalid, and the bylaw is inherently anti-Semitic. "It would not be acceptable for students to adopt bylaws banning Black or Chinese speakers, perhaps with an exception for Black or Chinese students who agree to criticize their communities," he wrote. "This would immediately be recognized as exclusionary conduct, not protected speech. And we would not accept the response that these groups permit Black or Chinese members, as long as these minorities do not wish to appear as speakers."

Responses from other Jewish leaders include: 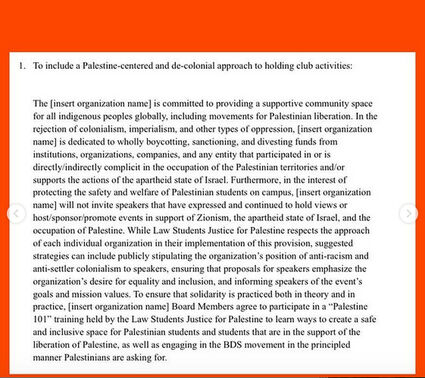 StandWithUs CEO and co-founder Roz Rothstein: "Half the world's Jewish people are in Israel, the ancestral homeland of the Jewish people, and the other half likely have friends and/or relatives who live there. Denying Jews the right to self-determination creates a double standard against only one country in the world. Those who lead biased, anti-peace campaigns should rethink their end goals and be honest about their prejudice against the Jewish people and the only Jewish country in the world."

AMCHA Initiative Director Tammi Rossman-Benjamin: the bylaw "is part of the anti-normalization element of BDS [Boycott, Divestment and Sanctions], which seeks to exclude, marginalize and demonize Jewish and Zionist identity on campus..."

Canary Mission: "This kind of discrimination towards any other group on campus would be unacceptable. It is not acceptable towards Jews or Zionists either."