Comedy Reflects Our World, as Collaborative Invites Kids and Parents to do Stand-up Comedy.

There's even a show for adults where moms are encouraged to bring their babies! 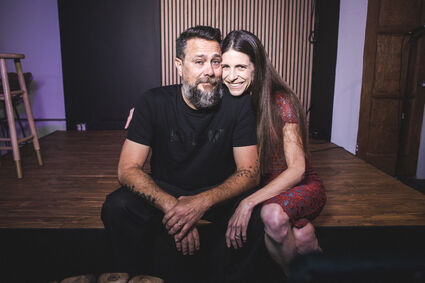 This collaborative space is built around inclusivity and advancement for all. Owner and comedian Nicole Blaine emphasized, "Using comedy as a vehicle for good and social progress is who we are." The club's name, The CROW, stands for Comedy Reflects Our World. Their mission is to "program and elevate voices that have historically been underrepresented in LA's comedy club scene." Namely parents!

The Crow, is the best (and only) comedy club for parents. Featuring seasoned performers and L.A.'s most exciting new voices, The Crow offers both family-friendly and not-so-family-friendly shows. There's even a show for adults where moms are encouraged to bring their babies!

BYOB (or Bring Your Own Baby/Boob/Bottle/Buggy) is a mid-day comedy show for parents, by parents, that you can bring your baby to- because they don't understand sh*t yet. (Stroller parking included!) Enjoy a show in the middle of the day instead of crying in the corner while the baby doesn't nap.

"Nothing alleviated my postpartum like a good laugh/cry with fellow new moms," says Nicole. "Building community and resources for parents is our mission." As a new working mom with a colicky baby, Nicole had a hard time finding her support group. Most of them met during the day when Nicole was stuck at work, pumping breast milk in a bathroom on her lunch break. That's why she's excited to bring BYOB to the community on the first Saturday of every month.

Parents needing their kids out of the house will find plenty of opportunities to get them involved through classes, open mics, or seeing The IRL Show, for anyone over 13.

After lock down and Zoom classes, kids need to get out and be social. Teenagers who find comedy on YouTube or TikTok can see a legitimate show with professional comedians in person; out of the house and off their phones! Drop off your kids and enjoy a date night!

Early birds can enjoy the teen open mic at 7pm and grab dinner at Birdie G's next door with a 10% discount (with tickets to The Crow). Families can enjoy comedy together! All are welcome at The Crow's (G-rated), super silly, high energy comedy show, Pull My Finger!

Their house improv team, Happy Crow Lucky, is fun for kids with great innuendos for parents. The first Pull My Finger show is Saturday, October 29th. You're encouraged to dress up in your Halloween costumes for trick or treating!

Delight in the hipster cool, modern mid-century vibe, with teal velvet seats; a real class act-Hollywood meets Silverlake, if you will, but in our back yard! But what's cooler than that? The owners are a down-to-earth, humble and welcoming couple, bred locally, meeting at santa monica high school in 1992 as theatre nerds. Nickey and Mickey Blaine have been producing and teaching theater, film and comedy together ever since. They executive produced and directed the stand-up special Burning the Light on HBO. Nicole has been producing annually The Showdown Comedy Festival at Westside Comedy Theater. And so much more.

Personally speaking, I can't recommend this club highly enough. My daughter Deja attended their comedy camp three times and thankfully she slayed stand up at just 11 years old. What? But the real show stealers, Penny and Hudson were as young as 8! With skills like that, those kids will take on the world. Better yet, The Crow's featuring world-famous talent like Whitney Cummings this month makes this spot your new favorite fun night out! 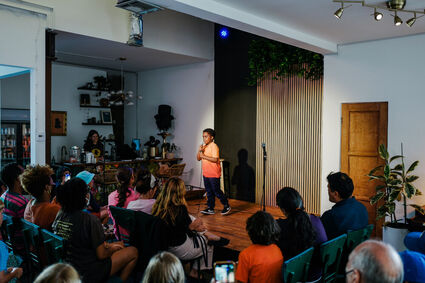 Hudson from the Crow- A Star is Born

Post this on your fridge so you don't forget next time you get bored with your couch and TV. Nothing beats live entertainment. For Show Information, full calendar, classes and directions CrowComedy.com. Free parking at Bergamot Station Arts Center, Security 24/7.