North Korea is stepping up propaganda a month ahead of a rare Seventh Party Congress in May.

North Korea is stepping up propaganda a month ahead of a rare Seventh Party Congress in May.

An editorial that ran on Thursday in the Rodong Sinmun reflected on the past – particularly on the Third Party Congress held 60 years ago in 1956.

North Korea stated the country built a brilliant path to "creation and construction" during the Third Congress, and that the Seventh Congress is to be equally "historical."

The editorial also poured scorn on the "U.S. imperialists and South Korean puppets" for attempting to march North and unify Korea by force in 1956, "even before the ink had dried on the [1953] Armistice."

But enemy policy did not affect the outcome of the 1956 congress, during which North Korea founder Kim Il Sung devised a five-year plan for socialist reconstruction, according to the Rodong.

"In the span of a short time, our country was able to lay the foundation of socialist industrialization," the newspaper stated.

North Korea did not identify the factory or its whereabouts, but stated Kim was pleased with the "enthusiasm" of the workers as they engaged in a "70-day battle" ahead of the Seventh Party Congress.

The exact date of the congress has not yet been announced, but most analysts expect it to be in May. That means North Korea, which kicked off the 70-day prep period in March, is now on the path to this Potemkin event. 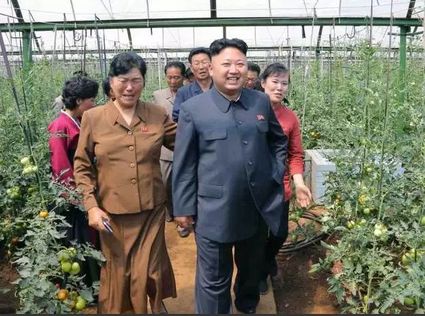 Recent visitors to North Korea say that the roads and fields are full of workers desperately trying to upgrade torn up roads and improve the look of the place - a challenge given the DPRK's poverty. Wooden distance markers along the roads have been painted a uniform blue and surrounded with circles of white stones, for example--a useless gesture.

Signs have been erected with slogans such as: "Let us all become honorary victors in the '70-day campaign' of loyalty!"

This Congress is seen as Kim Jong Un's opportunity to seize the day and make a mark on the DPRK's leadership. Although there are no signs that his grip on power is slipping, the 33-year-old is exceptionally young to lead a Confucian country. Confucius venerated age over youth.

The young leader did not have anywhere near the time, nor the type of preparation that his father, Kim Jong Il, had from the first Kim to lead North Korea, grampa Kim Il Sung.

So Kim wants lots of fanfare surrounding this event. Mobilizing pretty much everyone in the country is one sure fire way to make sure they're aware of the event. Get excited people!