"So is every California doctor who told pregnant and lactating mothers that the vaccine was "completely safe" going to lose their license for spreading misinformation now?" 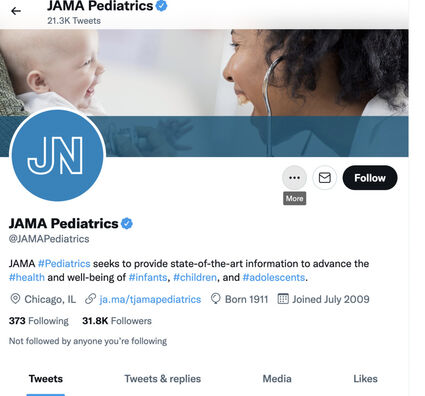 Breastfeeding Women Pass on MRNA Vaccines to their Babies, Says Journal of the American Medical Association

Reuters reported in July 2021 that "No Trace of MRNA Vaccine Found in Human Breast Milk." Unfortunately, it wasn't true.

"Trace amounts of #COVID19 vaccine mRNAs were detected in the breast milk of some lactating women," tweeted JAMA Monday. "Caution is warranted regarding #breastfeeding infants younger than six months in the first two days after maternal COVID-19 vaccination."

Needless to say, reaction on Twitter was swift. "So is every CA doctor who told pregnant and lactating mothers that the vaccine was "completely safe" going to lose their license for spreading misinformation now?" Tweeted AJ Kay

"Nice that you decided to mention this AFTER pushing to mandate it for 1.5 years" tweeted Christina Pushaw. "Yup... and NOW they're saying "caution is warranted". A little late???"

"It's not as if some women lost their livelihoods over this... oh wait 🤔" tweeted Jean @queens_parents.

"I'm a 34 yo mother, I chose to decline a medical treatment while pregnant and breastfeeding because I believe in bodily autonomy and freedom of choice. For exercising my right to choose, @JustinTrudeau thinks I'm a misogynistic extremist who holds unacceptable views. #TrudeauMustGo" tweeted Jessica. 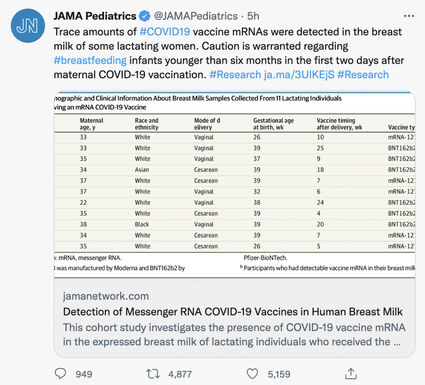 Breastfeeding Women Pass on MRNA Vaccines to their Babies, Says Journal of the American Medical Association

From the study:"Vaccination is a cornerstone in fighting the COVID-19 pandemic. However, the initial messenger RNA (mRNA) vaccine clinical trials excluded several vulnerable groups, including young children and lactating individuals.1 The US Food and Drug Administration deferred the decision to authorize COVID-19 mRNA vaccines for infants younger than 6 months until more data are available because of the potential priming of the children's immune responses that may alter their immunity.2 The Centers for Disease Control and Prevention recommends offering the COVID-19 mRNA vaccines to breastfeeding individuals,3 although the possible passage of vaccine mRNAs in breast milk resulting in infants' exposure at younger than 6 months was not investigated. This study investigated whether the COVID-19 vaccine mRNA can be detected in the expressed breast milk (EBM) of lactating individuals receiving the vaccination within 6 months after delivery."