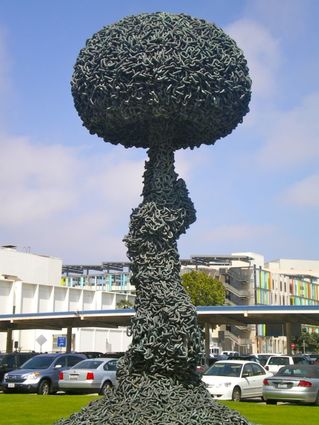 The two-year chain reaction of controversy that a gigantic sculpture of a nuclear mushroom cloud has set off across Santa Monica's otherwise friendly shores has ended.

The City Council voted 6-1 Tuesday night in favor of accepting more than $100,000 in donations and restoring the aging, three-story work called "Chain Reaction."

City officials said some of the links were rusting, and they worried that children who liked to climb all over the sculpture in front of the Civic Center would be hurt if it fell down. The city's Arts Commission voted to get rid of it.

Then a coalition of supporters, led by the beachfront city's longtime, colorful peace activist, Jerry Rubin, sprang into action.

Supporters got nine former mayors to support their efforts, including one who had called the work ugly and voted against taking it in 1991.

Most important, City Manager Rod Gould said, supporters raised more than $100,000, showing that the community really did want to keep the thing.

"I'm proud that the city has appreciated the effort of the community to save this wonderful, landmark sculpture," Rubin said after the vote.

The city's staff recommends the council cover the rest of the repair costs, although it's still uncertain just how much that will be.

The work, by the late Los Angeles Times political cartoonist Paul Conrad, has always been controversial.

When the city took a straw poll on whether to accept the sculpture in 1991, the vote was 730-392 against. Officials ignored the results amid allegations that Conrad critics had stuffed the ballot box.

Although regarded as a liberal, the Pulitzer Prize-winning cartoonist skewered politicians across the political spectrum and had his share of critics on all sides.