There's No Panic But Storage Reserves May Help 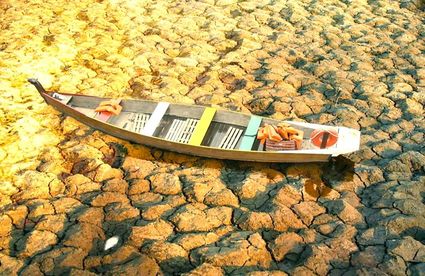 The lack of rain this winter and a potential water shortage is a concern to Southern Californians, especially since Governor Brown declared a drought emergency a few weeks ago. On Monday night the Culver City Council heard a report on the drought as it might affect the local area.

The presentation, given by Fernando Paludi, manager of water policy for the West Basin Municipal Water District, and Paul J. Rowley, district manager for the Golden State Water Company, was meant to be informational and an overview of the situation. No legislation is being considered at this time either on the state or local level (although as Mayor Jeff Cooper observed, Culver City has ongoing regulations concerning water conservation).

Noting that rain was predicted for later in the week (and it may be raining as this publication goes to press) Paludi added: "No matter how much it rains this week, we are so far behind that we'll still be in a subnormal condition this year for the third consecutive year."

Paludi's stat charts showed that 2013 was "the driest year on record in 119 years." The period between October 2013 and January 2014 was the driest on record in the entire recorded history of California. It has been suggested that this is the worst drought since the year 1580.

Satellite photos showed a dire picture, with the snow packs that were visible only a few years ago now diminished. There is only 15 per cent of the normal snow pack and "statewide we are at 25 per cent of what is normal for this time of year," said Paludi.

The Colorado Basin is at a "normal" level for this year and has been for two or three years but because some of the previous years it has been dry, the huge reservoirs are less than normal. "This is a serious issue for the seven states that share the Colorado water supply."

"We are not hitting the panic button," explained Paludi. "But since an emergency has been declared in Southern California, we have to look at our storage reserves."

These reserves hit a low point in 2008 after a drought had been declared in 2006. Water rationing was instituted in 2009 but reserves improved during the next few years. By 2011 and 2012 water storage reserves were up.

So there will be no rationing this year but the situation will have to be monitored on a year-to-year basis. In the meantime, it would be best for people to voluntarily conserve water.

Council member Jim Clarke wanted to know how Culver City compared to other local cities in terms of the actions it is taking—and should Culver City be following the examples of other cities?

Paludi admitted this is difficult to comment on at this time, although he added that he could provide examples of actions taken by other cities.

“Los Angeles, for example has been ‘out there’ [taking actions to conserve water],” said Paludi. “But Los Angeles has its own water provider.” [ Los Angeles Department of Water and Power, (LADWP) the largest municipal utility in the United States, serving over four million residents].

Mehaul O’ Leary had an inspiration: getting children involved in an educational program to conserve water, thereby setting the adults an example to follow. He suggested it be called “SWAT” (Saving Water Action Team” with kids earning points for decreasing water consumption and then trading them in for rewards. Such a program would of course require funding.

In other actions, the Council celebrated the 50th anniversary of the Sister City program between Culver City and Uruapan, Mexico.

Karroum spoke of visiting Uruapan, a city in the state of Michoacan (known for its avocado production).

“I had the opportunity to visit Uruapan about 10 years ago. I found the people of Uruapan to be very warm. Even as we arrived at the airport they called us ‘hermanos’ (siblings) and were kissing us.”

Consul-General Sada asked Mayor Cooper if he had visited Uruapan yet.

Cooper replied that he had not and Sada exclaimed “Then I invite you to go.”

The Council also thanked John Williams of the Culver City Cultural Affairs Commission, for his donation of a grand piano for the Veteran’s Memorial Auditorium.