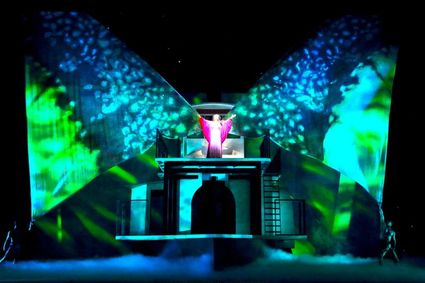 The magical realism of Gabriel García Márquez was the inspiration for LA Opera's current production, Florencia en el Amazonas, which

Its creative team consisting of composer Daniel Catán, librettist Marcela Fuentes-Berain. and director Francesca Zambello travelled to Colombia to visit Gabriel García Márquez with the intention of putting together a new opera inspired by his works. He helped the team create a story which became the basis for the libretto created by his student Marcela, which was then set to music by Catán.

To fully experience the local geography, the team then travelled to the Colombian state of Amazonas where the Amazon river begins. They hiked through the jungle, making sure to see a real anaconda, and then continued by boat, exploring the river as it snaked through the rainforest.

The opera they came up with falls in a class where a set of characters wander into a magical space and get transformed: think Midsummer Night's Dream or the baroque pstiche The Enchanted Island based on the Tempest. In Florencia, it is a steamboat the El Dorado on a mystical voyage on the mighty Amazon through a magical rainforest.

The story recalls historical events: the great opera house in Manaus has remained locked and boarded up for decades will be re-opened for the performance of renowned diva Florencia Grimaldi who will return to her homeland after having taken Europe by storm.

Every passenger on the boat is searching for something, full of longing, and with great expectations from this trip. Most notably the diva herself, travelling incognito, hopes to find the great love of her life Cristóbal who awakened her singing voice, but whose love she renounced to seek fame and fortune in Europe; Cristóbal himself went off to search a rare butterfly in the Amazon forest. The bickering older couple Paula and Álvaro have heard that Florencia's singing had the power to re-ignite love, and hope it will do the same for them. Arcadio, the captain's nephew who helps him out hates his life on the boat and longs to fly - to exotic, far away places - Mt Everest, Tahiti. Rosalba, the young woman who has devoted her life to researching Florencia, can't wait to finally meet and interview the great diva herself.

Together, the characters provide three perspectives on love: Arcadio and Rosalba find mutual attraction but the young lovers decide to not to pursue it; they rationalize that love eventually withers away, leaving former lovers trapped as prisoners - a position substantiated by the older couple's bickering, and echoing Florencia and Cristóbal 's own rejection of love for other callings.

Catán's score is ravishingly beautiful, its passionate melodies and lush orchestration remind you of Puccini and Debussy. The rising and falling lines of the wind instruments evoke the river and the variety of birdsong, with percussion instruments providing the exotica of the jungle and wonder of the journey.

The opera was co-commissioned by Houston Grand Opera, LA Opera and Seattle Opera, and of historical interest in being the first Spanish language opera commissioned by major opera houses in the US.

The production is conducted by Grant Gershon, LA Opera's Resident Conductor, who also conducted the world premiere of Daniel Catán's final completed opera Il Postino in Los Angeles in 2010. Francesca Zambello restages and updates a production she previously directed at LA Opera in 1997.

The running time is approximately two hours and 15 minutes, including one intermission. A pre-performance talk by Brian Lauritzen of Classical KUSC takes place one hour before curtain.