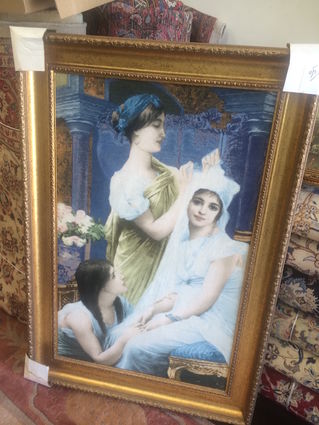 My wife finally made me drag that rug in our storage pile downstairs to a rug store. I took it from a client in exchange for $1000 in services about 20 years ago. It's a nice rug, I thought. But it's been, well, lying around ever since.

With reluctance and a last yell from the wife, I threw the old rug into the backseat of an Acura, then sped off to Ruben's Rug Gallery & Jewelry. "Hand Wash Carpet & Repair Old & New Silver Handicrafts," says Ruben Saidan's card.

Saidian really knows his rugs. He can tell you the value of your rug (mine turned out to be $10. "It's from Turkey and it's not handmade," he said dismissively. But authoritatively. And kindly.

Saidian says he grew to like Americans because he had a shop in the American Embassy in Teheran, "under Ambassador Kelly." He has a photo of it on his wall.

Saidian's shop feels like a small museum, and is worth seeing even if you don't plan to spend $3500 on a rug He doesn't mind visitors who don't plan to buy, because it allows him to play museum curator.

Some of his rugs are worth up to $10,000, being handmade masterpieces, signed by the artists within the rug itself. 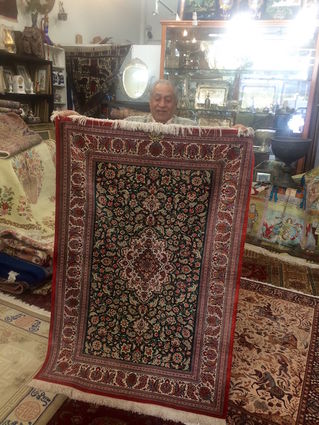 None of his carpets fly (and he would never claim that they do), but some of them reflect light so well they seem to gleam.

Saidian lacks a successor to carry on the business. He has 3 daughters in Los Angeles, but none of them are especially interested in his retail store, Saidan says. "They have families instead," he says.

Ruben also has nice silver items. You'll find him in the Persian community on Westwood Blvd, between Olympic and Santa Monica Blvd.