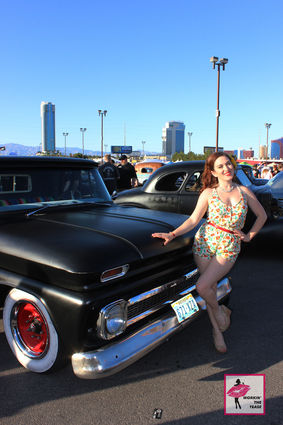 Pinup Julia with a classic car.

Call it the vintage Comic Con! Last weekend saw thousands of SoCal residents flock to Viva Las Vegas Rockabilly Weekend, a three day festival of music, cars, and dancing is held annually at the Orleans Hotel and Casino in Las Vegas, Nevada. Now in its nineteenth year, this festival of hepcat fun has grown to be the largest event of its type anywhere in the world.

From polka dotted bikinis to greased back hair, pinup/rockabilly style is noteworthy for having shaped popular culture for decades. Its iconic imagery represents a culture of independent thinkers who follow their passions, however far off the beaten path. Now in its 19th year "Viva" attracts over 20,000 people to the Orleans. Events during the festival included over 65 live bands, 15 DJs, 6 music venues, a pre-1963 car show, over 120 vendors, burlesque shows, tiki pool parties, pin-up contests, Sailor Jerry rum tattoo stations, and dancing all night long.

Santa Monica based Pin-Ups on Tour traveled to the festival to celebrate in style! Troupe members Pin-Up Julia and Dixie Mae Rebel donned their trademark red lips (from their lipstick line "Kiss A Vet") and struck a pose in style. Pin-Ups On Tour's goal, with a logo of "a good time for a great cause," is to recreate the magic of the Hollywood Canteen that operated during the 1940's as a club offering dancing, drinks, and entertainment for servicemen, usually on their way overseas. Their show's evening features dancing pin-ups, comedy, variety acts, soulful lounge singers, and raffle-ticket selling beauties in an event that free to veterans and active duty military personnel. Pin-Ups on Tour has a forty city national tour planned for June and July where they will travel across the country bringing their old-fashioned song and dance show helping make veterans smile. They are celebrating their one year anniversary in San Diego on April 30th.

Some of the highlights from Viva Las Vegas included the Los Angeles based Audrey DeLuxe's Burlesque Bingo. This original striptease game show featured the best burlesque entertainers in a racy raucous time where the performers "take it off" and the "audience wins."

Miss DeLuxe is a director and actress, known for film and television in roles such as Audrey Deluxe Burlesque Extravaganza (2012), Satan's Angel: Queen of the Fire Tassels (2012), and Live Nude Comedy (2009). Along with being the creator of Burlesque Bingo, Audrey also programs all the burlesque at Viva Las Vegas Rockabilly Weekend including the Friday night showcase. Another Los Angeles based burlesque dancer attending Viva this year was the infamous Dita Von Teese, the "most famous burlesque dancer in the world," who was doing a signing her newest book "Your Beauty Mark: The Ultimate Guide to Eccentric Glamour," before jetting off to San Francisco for a gig that night.

The Viva Las Vegas car show is one of the largest vintage car shows in the country. From Corvettes to Mustangs, all the autos featured at the show are strictly pre-63 and must be in a style from that era. There were over 800 cars were registered this year with more than 20,000 people attending on Saturday to view these classic beauties. 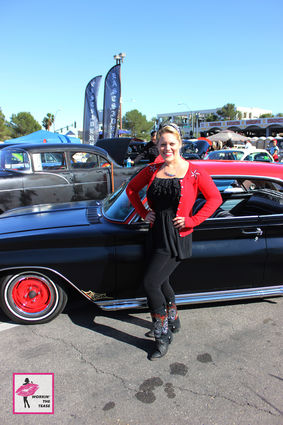 All in all, Viva had something for everyone looking to embrace the past; if only for those three days of dames, Dodges, and dancing!

Kat Thomas is a food and travel writer. You can check out more of her writings at edibleskinny.com