The Ain't Rights in a collective hung-over state 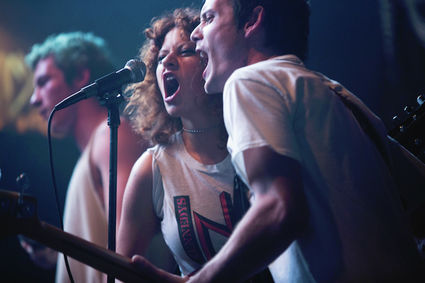 I always knew "green rooms" could be dangerous places - especially back in the 70's and 80's at the height of metal and then with 90's punk and free-flowing drugs and alcohol, but Jeremy Saulnier takes the idea of a green room to a whole new deliciously twisted level with GREEN ROOM. As we know from "Blue Ruin", Saulnier is adept at carefully placed and judiciously utilized tongue-in-cheek double entendres, and GREEN ROOM is no different; most notably with the band's name - "The Ain't Rights" - because something ain't right in this GREEN ROOM. The story conceptualization is beyond believable and thanks to a gritty no holds barred authenticity, is resonant, frightening and fun.

Comprised of lead singer Tiger, bassist Pat, guitarist Sam, and drummer Reece, we first meet "The Ain't Rights" in a collective hung-over state, stranded in the middle of a cornfield, not knowing where they are or how they got there. Seems someone fell asleep at the wheel and their well-worn decrepit van kind of drifted into the field as it ran out of gas. Seeing themselves as the next great white hope in punk, but also on the verge of disbanding the band, in desperation they agree to play a gig (after siphoning gas from cars to make the drive) based on empty promises only to find it all fall apart. At each other's throats and with no money, they reluctantly accept an offer extended by the guy who just booked this failed gig, based on assurances of a "guy who knows a guy who'll take care of you" if they head out to rural Oregon to play at a skinhead roadhouse run by the villainous white supremacist Darcy.

Clearly out of their element with the Neo-Nazi crowd at the roadhouse, The Ain't Rights decide to shake things up a bit and break into a "rousing" rendition of the Dead Kennedy's 1981 hit single "Nazi Punks F**k Off." Needless to say, not exactly the crowd pleaser of the night. Intending to make a swift exit after getting their pay, the group is escorted into the "green room" following which they head out to the van to shove off. Unfortunately, the group left something behind and Pat rushes back to the green room to get it only to stumble on to a dead body on the floor with the decedent's quirky friend Amber in hysterics and crying over her dead friend.

As the group comes looking for Pat, they all become prisoners at the hands of Darcy's henchmen, led by club manager Gabe who, in all honesty, comes across as nice as nice can be. While Pat demands police be called, and attempts to do so on his cell phone before it's snatched away from him, as time passes, it becomes clearer that there will be no police. Attempting to calmly negotiate with the youths, it seems Darcy also has other plans for these witnesses, including Amber, and in the back and forth of trying to reason with them, the group barricades themselves in the GREEN ROOM, holding Big Justin, one of Darcy's men as hostage, while they try and formulate an escape plan. But when push comes to shove, it's an all out blood bath in a cat-and-mouse game between Darcy's skinheads and The Ain't Rights and Amber, with some of the sickest methods of blood-letting, weaponry and dog attacks put into play. And leading the charge is none other than Amber.

Saulnier excels with his character design, most notably with Imogen Poots and Alia Shawkat. As Sam, Shawkat makes a strong showing as Sam goes from the obvious practical business brains of the band to freaked out frightened kid. As always, Imogen Poots is spot on with emotional range as Amber, but is beyond stand-out as it comes down to she and Yelchin's Pat in all out battle for their lives. Poots has such a commanding presence in the third act that you can't take your eyes off her, much of which is due to Saulnier's terrific visual grammar and lensing design, honing in on the confident attack mode with which she holds a box cutter. Anton Yelchin flips back and forth on a dime as Pat, and while coming across as more of a pacifist than punker, Yelchin is completely at ease within the punk band atmosphere, obviously due to his own time playing in a band.

Macon Blair has been on my radar since his "Blue Ruin" and with his turn here as club manager Gabe, Blair knocks it out of the park. Blair always has this beautiful humanity to him and here is no different where Gabe is under the thumb of Darcy, just accepting the crumbs he is handed with compliments and, at long last, red laces (a significant moment in the lives of Darcy's skinhead henchmen). But here, Blair brings a subtle emotional ambiguity to Gabe which keeps you guessing as to just how loyal he is to Darcy. He may be a minion and do his bidding, but one look at his eyes as he shifts them down to the floor or blinks a few extra blinks of discomfort, tells you there's more to the character. Saulnier and Blair are a fabulous filmmaking pair.

And then there's Patrick Stewart. He is the calmest meanest most evilly sadistic man on the planet as Darcy. He has boldly gone where few men have gone before, and does so deliciously. A big surprise is Mark Webber in a more fleshed out and beefed up role as Daniel. Didn't think Webber had this much depth and oompf to him, but he does!

Written and directed by Jeremy Saulnier, GREEN ROOM starts with a simmer but quickly comes full boil, exploding by the 60 minute mark when a full on siege kicks in. Unfortunately, there are few secrets and twists left at this point which leaves GREEN ROOM reduced to a blood-soaked battle which, is fine, but somewhat of a letdown after the cat-and-mouse psychological mind games we've seen unfold the previous hour. Similarly, there is a flat resolution that leaves no sense of wonderment or why.

The real beauty of GREEN ROOM comes with its visuals. Applause Applause to production designer Ryan Warren Smith. The "club" is absolutely killer with its authenticity - and right down to the sound design within the venue and the sound quality. Following through with that are the actual musical selections which just fuel the anger and fire that burns white hot tinged in blues and greens in this battle. And yes - this is a battle - with music/lyrics-story-characters-visuals all in total synchronicity feeding and interweaving with one another.

Already a huge fan of cinematographer Sean Porter thanks to the vibrant beauty he brought to "Kumiko the Treasure Hunter", here, lighting and lensing is distinctive within the club venue, employing dutching and a green-blue smoky pallor, the former of which is carried through once the "siege" begins and The Ain't Rights are taken hostage, at which points hand held camera soars while lighting adds a sickly yellowish tinge to everything. Framing and POV when shooting Eric Edelstein (Big Justin) is perfect as it makes Justin even more imposing and threatening, but then POV is shifted as is focal length as a gun with its cartridges comes into full frame with various individuals. Night time exteriors and the drug lab in the basement make great use of corners and unseen negative space, just fueling the fear. Extremely cinematic even in those close quarters of the room itself. Expanding on Porter's visuals is Julia Bloch's editing which gives rise to some nice jump in your seat moments with the various attack moments and body points. 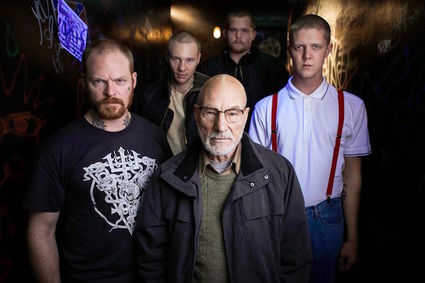 However, as technically polished as the visuals are, problematic are the prosthetics used for injuries, especially ripped out throats that have no jagged tears but rather nice soft rounded bulbous "edges" which is not what ripped out flesh looks like. On the plus side, great new uses for duct tape, although I want to know what brand they were using considering Poot's Amber has a gunshot wound with bullet in leg and just a once around the thigh with the duct tape had no blood, bleeding or blood stains.

GREEN ROOM is a punk perfect twist on the horror genre thanks to Jeremy Saulnier's machete-sharp craftsmanship and vision.

Written and Directed by Jeremy Saulnier