No injuries and only minor damage 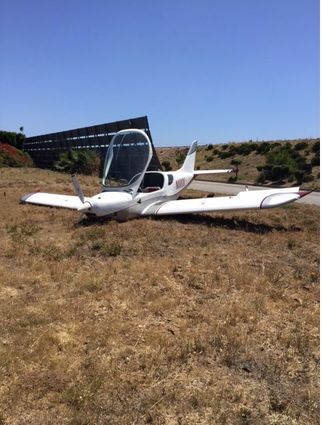 At 1:34 PM on Sunday May 22, 2016, Santa Monica Fire Department was notified of a single engine private aircraft crash, at the east end of the Santa Monica Airport Runway.

4 Engines, a Ladder Truck, a Hazardous Materials Unit, and a Chief Officer responded. The first arriving unit found the aircraft of the end of the runway, fairly intact, with no ensuing fire.

Santa Monica airport is controversial. Many neighbors who want to shut down the century old airfield, complain that in case of such events, the runway is just too close to housing.

It has been said that no U.S. airport is as close to housing as Santa Monica airport. Historically, dense housing was constructed near the airport hurriedly in the 1940's, to house wartime employees of Douglas Aircraft.

Small plane aviation periodically produces crashes. Noise and crashes equal a local political movement to permanently close the airport, and turn it into a park.

“There hasn't been a single fatality in the neighborhood around Santa Monica airport. IN A CENTURY”. Aside from the 30 plus passengers including children that have been killed in SMO plane crashes, on June 6, 2003 an aircraft (Beech A36Tc) took off from SMO, headed for Las Vegas and crashed into a three-story apartment building at 601 N. Spalding Dr., near Fairfax High School killing a resident of the apartment building died and leaving seven serious injuries to people on the ground.

By that logic there are some Native Americans who want your house/land back. For the most part, anyone who bought their houses near SMO knew the airport was there when they purchased it. It's akin to me buying an apartment next to the 405 and being upset that it's noisy/polluting/inconvenient, then expecting the state/feds to move/close it for me.

The airport was here first? Not true. My home was built in 1927, and the Federal Government did not stick its nose in here until WWII. It's time for them to get out and give us back our land.

All this talk about safety zones & stuff. The airport was there first so lets wipe out all the houses on both sides (right of way). Jobs and busniess stay, more parks on either side of the runway for kids to play at and learn about what they may want to do some day (fly). No more (i buy my house without thinking about a runway or school, ect was near it) residents. Problem solved.

Another example? There hasn't been a single fatality in the neighborhood around Santa Monica airport. IN A CENTURY. That's 'scary?' By contrast, there was a traffic fatality on Bundy Drive in 2012, and six traffic fatalities in Santa Monica in 2014 alone ( http://www.city-data.com/accidents/acc-Santa-Monica-California.html ). Not to mention that the city of Santa Monica TURNED DOWN the FAA's offer to install safety barriers and aircraft-arresting measures FREE. Hypocrites. Whine to them.

Glad the pilot was okay. But this is yet another scary example of why we need to close down this airport. With no runway protection zones on either end of the runway, it's lucky this plane didn't go into busy Centinela Blvd. a few feet away, or worse, the houses across the street.