Event was attended by reps from 130 countries & had 17 speakers 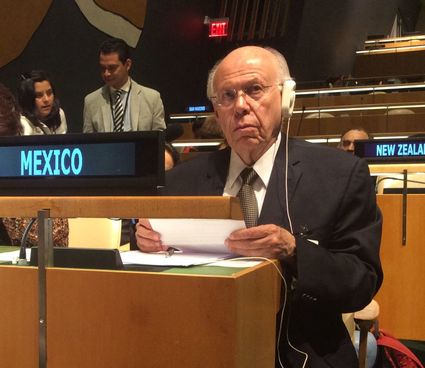 • He was one of 17 speakers of the Assembly, which is attended by representatives of about 130 countries

The Human Immunodeficiency Virus (HIV) is not a problem in some regions of the world, it is a matter of all countries and demands to build inclusive societies where people have the same rights, said the Mexico´s Health Minister, Jose Narro Robles in the High-Level United Nations Meeting on HIV/AIDS 2016, at the headquarters of this international organization.

The Mexico´s Health Minister was one of 17 speakers at today´s meeting, which was attended by about 130 representatives of countries member of the United Nations Organization (UN) Monaco, Canada, Zambia, Switzerland, Uganda, Haiti, Burkina Faso, Lesotho, Gabon, Ukraine and the Russian Federation, also participated.

Speaking at the plenary session of the Assembly, Dr. Narro Robles said that 15 years ago, in the same organism, the first Political Declaration on HIV/AIDS was adopted.

If the work done during that time maintains, the actions of greater impact and reinforce of solidarity with nations that need and less have, are strengthened, there is a possibility that by 2030, the epidemic stops, warned.

In his message to health ministers, first ladies and heads of state, civil organizations, international agencies and academics, among others, Narro Robles proposed to listen to key populations involved, and incorporate them into the response of each country, attend the issues of sexual diversity and combat homophobia and social transphobia, with full respect for human rights.

In that regard, he said that the populations most affected by HIV, must be explicitly named: gay men, men who have sex with men and their female partners, transgender people, sex workers or drug users.

Narro Robles said the disinterest or denial do not solve, however, we must recognize that AIDS is still a disease that affects the development and, therefore, demands to remain visible. In the case of adolescents and youth, he stressed the importance of accepting that in Mexico one of three living with the virus, ignores their HIV status.

He considered a priority to strengthen comprehensive strategies that respond to the needs of young people, ensuring that secular sex education, based on scientific evidence, is a fundamental pillar for the required changes and provide the elements to assume a responsible, informed and protected sexuality.

Two other points that Dr. Narro Robles highlighted were the importance of expanding access to HIV testing without discrimination and in the case of people who inject drugs, change the prohibitionist policy for one of public health and respect for human rights, as was raised in this place with the Mexico´s President at the UNGASS meeting on last April.

Today, he said, has been achieved an increase of the life expectancy for people who live with HIV, as well as the progress building a more inclusive and just society in permanent alliance with civil society organizations of people living with HIV, concluded. 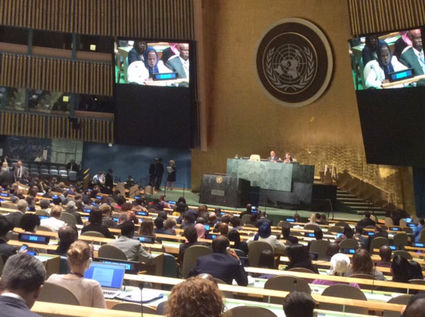 It should be noted that this year, according to the Joint Programme of the United Nations on HIV/AIDS (UNAIDS), in the next five years should be a rapid response to this condition, in order to achieve the goals set for2020, such as:

Moreover, as part of the working visit of the Mexico´s Health Minister in New York, before attending the UN meeting, he visited the Mixteca Organization to meet health services offered to migrants.

After the meeting of the United Nations, he held bilateral meetings separately with his counterparts from Sweden, Germany and France.