Is bicycle theft rampant in Santa Monica and why?

It appears that theft of bicycles is up 30% this year. Is the Expo to blame? 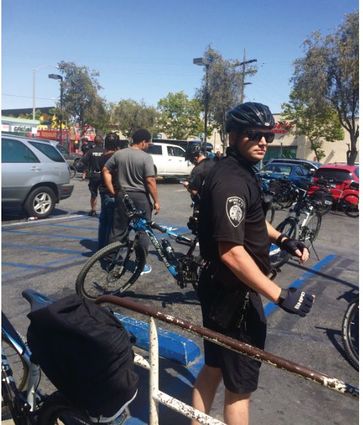 Even the police in Santa Monica get around on bicycles

I had my bike stolen yesterday from the 17th Street Metro Station parking lot's bike rack. I called SMPD and filed a police report on line. I thought it would be interesting to see how prevalent bike theft is in Santa Monica.

In 2014, there were 400+ bike thefts. In 2015, there were about 580 bike thefts. Rounding and not being too precise, it looks like a 30% increase in bike thefts year over year. I don't know the rate for 2016 but am willing to venture a guess that the upward trend continues.

The City has invested quite a bit of money into making this a bike friendly City. I bought in and have my Metro Tap Card and my bike which is now gone. I visited several City websites and noticed a very tepid approach by the City to bike theft. First, the minutes of the City Council discusses the possibility of licensing bikes....so that they can be recovered when stolen. 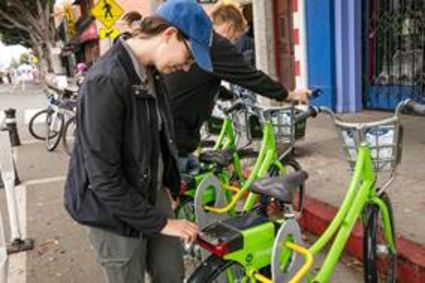 Bicycles may be rented by the hour through Santa Monica's Breeze Bike program.

No adoption of law...just proposed. Huh? I lived in a town with bike licenses. It does not work. Second, what is the City Council's approach to bike theft? A notice, buried in their webpage that says (I'm paraphrasing)...lock your bike with a U-Lock.

Thank you City Council. Over 1,000 bicycles were stolen in the calendar years 2014-2015. I have the feeling that the Council blames the victim and not the thief. What has the City done to combat bike theft (which is not a petty crime)? How many bikes were stolen in 2016? I am willing to bet the trend continues upward.

People need to know how the City's is responding to bike theft. What is it's commitment. What happens when a police report is filed.

It is especially terrible at the main library where homeless bike thieves loiter waiting for anything they can get. Lately even when I had everything else locked down (ULock, wheels cabled, seat off and locked with the ULock), they stole the back quick release skewer (it holds the wheel to the frame). It almost felt like spite . . . they took THAT because they couldn't get anything else. The library security officers do NOT patrol the parking lot or bike racks, only inside. I would recommend that you NOT take your bike to the main library AT ALL. Homeless thieves will steal anything that is not completely locked down (your light fixtures . . . anything).

Not just U-locks but extra cables. Thieves will steal any wheels or seats that are not locked down. If you see a bicyclist with a third wheel biking through town, it is likely the theft of someone's front wheel that was not locked down. Seems to me that police should consider carrying an extra wheel suspicious activity, pull people over and check for warrants. The main library is a hotbed of bike and other theft. The downtown opcc shelter does not help.