Harry Burkhart, 29, found guilty of starting more than 40 fires in the Southland during the 2011 holiday season. 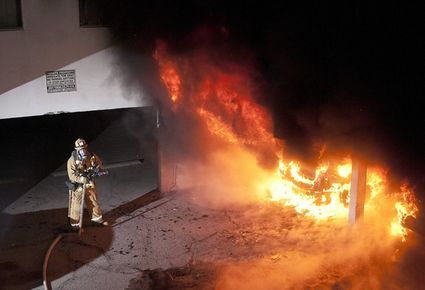 Serial Arsonist was Convicted on September 1 of multiple Counts of Arson.

A serial arsonist was convicted on September 1 of multiple counts of arson. Harry Burkhart, 29, a German national, was found guilty of starting more than 40 fires in the Southland during the 2011 holiday season.

Burkhart's pyromaniac spree began after his mother, Dorothee, was arrested for her connection to crimes in Germany and was in apparent retaliation for that situation. He started the fires mostly under cars parked in carports or near homes.

On at least one occasion, on December 30, 2011, he set a car ablaze in the parking lot of a shopping center in Hollywood. Another car was similarly set on fire at a nearby lot on New Year's Eve. In all, at least 40 fires in Hollywood, West Hollywood, and the San Fernando Valley have been attributed to Burkhart.

Since Burkhart pleaded not guilty by reason of insanity, a second phase of his trial will begin September 6 when jurors will be given evidence to decide if he was sane at the time of his crimes.

Burkhart's defense attorney, Steve Schoenfield, had tried to persuade the jury that there was only solid evidence linking Burkhart to half a dozen of the arson fires. In the rest of the cases, the evidence was merely circumstantial. Those fires could have been caused by a copycat. "The M/O is not so unique that only one person, Harry Burkhart, is capable of doing those arsons," Schoenfield claimed. "We don't want to toss in all these other arsons that haven't been proven." 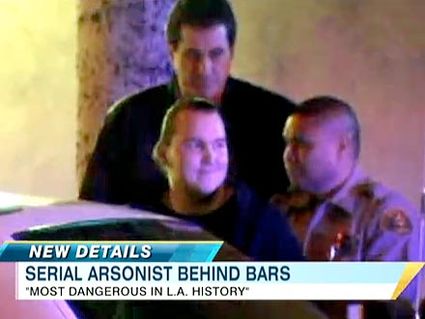 Serial Arsonist was Convicted on September 1 of multiple Counts of Arson.

The prosecution, however, led by Deputy District Attorney Sean Carney, argued that there was "overwhelming" circumstantial evidence against Burkhart for all of the fires. "Nobody knew what combination of fire-starters Harry Burkhart was using except for the police."

Burkhart was arrested on Jan. 2, 2012 when a reserve sheriff's deputy recognized his minivan in West Hollywood. Fire starter sticks were found inside.

Once Burkhart was in custody, the fires ceased.

"A copycat would have to know to stop lighting fires when Harry Burkhart was arrested - not a reasonable interpretation of the evidence," argued the prosecutor.

Burkhart, who asked the judge for a chance to give a statement to the jury, was told that once one chooses not to testify, he is not allowed to address the jury without cross-examination.

He faces up to 88 years in prison.