An Extraordinary Life Evoked: Review of "Anaïs : A Dance Opera"

The creators of "Anaïs: A Dance Opera," now playing at the Greenway Court Theatre, surmounted a daunting and enviable challenge, creating a work of music, dance, and projection to bring the diaries of the writer Anaïs Nin to life. 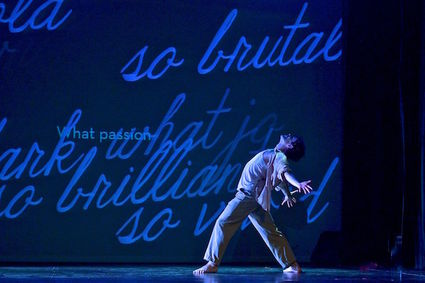 "The role of a writer is not to say what we all can say, but what we are unable to say." Anaïs Nin

The creators of "Anaïs: A Dance Opera," now playing at the Greenway Court Theatre, surmounted a daunting and enviable challenge, creating a work of music, dance, and projection to bring the diaries of the writer Anaïs Nin to life. Spanning 63 years, they tell the story of an extraordinary life in an extraordinary time spent amongst extraordinary people.

To distill these seven volumes into an evening's performance, composer/librettist Cindy Shapiro, and director/choreographer Janet Roston bent various genres to their intentions. Thus, in this case, the term "opera" means a "work of multiple disciplines" in the broader sense.

The character of Anaïs Nin has been split into two representations. "Eternal Anaïs" was adeptly sung by Madison Dewberry in a style that might be called a fusion of modern pop, Broadway or what you might hear at Cirque du Soleil. Eternal Anaïs provides the narrative glue. The second half of the title role, a character simply called "Anaïs," was danced with great emotional complexity by Micaela De Pauli, interacting with the characters in Nin's life - her father, two concurrent husbands, objects of numerous affairs and many prominent artistic and historic figures, including her most notorious relationship, with author Henry Miller.

Together, Dewberry and De Pauli were impressive in their range of expression, their technical agility, and in their sheer stamina – both were active onstage for almost the entirety of the near-two-hour performance. An able ensemble supported the principals. Brief respites for the performers were provided by spoken word interludes using recordings of Nin herself, speaking her own words, often accompanied by projections of her own handwritten diary entries. 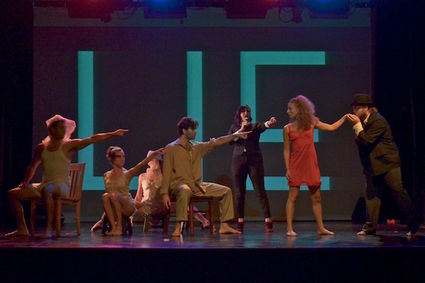 A welcome device now familiar to viewers of traditional opera was the use of subtitles. The use of projections, rather than fixed sets, allowed for rapid changes of scenery and provided an innovative, interactive touch to the words. While words form the backbone or basic structure for the piece, "Anaïs: A Dance Opera" is at its heart a work of dancing and dancers, executed with great care and respect for its subject. There are no show-off high notes for the singer, and no high-kicking finales for the dancers. Instead we, as audience, are given the deeper role of experiencing an emotional extrapolation on the subject of one author's life.

In addition to Rosten and Shapiro, who conceived and created the show, kudos to Lighting Designer Michelle Stann, who managed to keep the principal performers lit without washing out the projections behind them, all the while painting the mood with the appropriate colors, and to Joe LaRue for Production and Graphic Design, as well as to James Levy for Image Design.