U.S. Senate Race: Sanchez and Harris Face Off in First and Only Debate 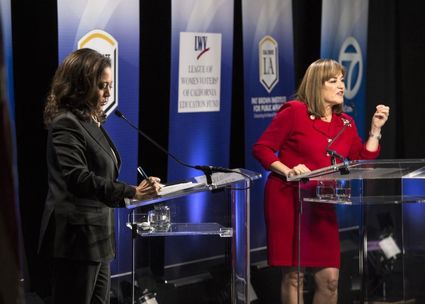 Loretta Sanchez and Kamala Harris displayed very different styles as they traded jabs at their first and only debate at Cal State Los Angeles Thursday afternoon.

The two candidates to replace 24 year Senator Dianne Feinstein, have largely similar views, both of them being Democrats. So they focused on each others record, which Harris accusing Sanchez of being the "number 3 most absent" person in Congress.

"We've done enough on border control, now we need to give immediate status to those members that are part of our community," said Sanchez.

Harris countered that she has broad Latino support, and endorsements from Latino community organizations.

Sanchez spoke of her international experience. "When you don't show up once, that should call into question your commitment," countered Harris.

The two candidates traded jabs on terrorism, criminal justice reform, gun control and for-profit colleges. But the central issue they returned to in the hour-long event at Cal State Los Angeles was who had the proven track record to most effectively replace retiring U.S. Sen. Barbara Boxer.

Sanchez touted her 20 years in Congress, her senior posts on the Armed Services and Homeland Security committees, and her votes against the Iraq war, the Wall Street bailout and the Patriot Act.

“I believe that I have the experience to go in on day one and do the job,” Sanchez said, later blaming AG Harris for the state’s increase in violent crime over the past year.

Harris touted her success in setting up a rehabilitation program for low-level offenders in San Francisco, and for investigations of banks and for-profit colleges. And she dismissed Sanchez's stint in Congress.

“My opponent has passed one bill in her 20 years in Congress and that was to name a post office,” Harris said. She also noted that Sanchez had missed more House votes in the past year than all but two other members.

Sanchez countered that she had a 95 percent attendance her first 18 years in Congress. She noted that when Boxer was a House member running for Senate 24 years ago, she voted on 54 percent of the bills in the House while Sanchez was there for 68 percent.

She also said that while she hasn’t had the lead on many bills, she’s been successful in the important task of getting various provisions and amendments inserted.

“It is clear that my opponent doesn’t understand how Congress works,” Sanchez said.

There was a considerable difference in the debate styles of the two, with Sanchez spontaneous and impassioned while Harris was measured and precise – a precision reflected in her attacks.

Harris went after Sanchez for a December statement that 5 percent to 20 percent of Muslims supported an Islamic caliphate and want to “institute that in any way possible.” Harris said such statements only fuel the efforts of Islamic terrorists.

“That is playing into the hands of ISIS and all they are doing to recruit,” Harris said.

Sanchez has stood by the statement, citing sources for the estimate and saying it’s important to acknowledge the problem. At the debate, she emphasized the importance of gaining the trust of the Muslim community in order to battle terrorism and said Harris was twisting her words.

The two also argued over for-profit colleges, with Harris defending her office’s investigations into those colleges and pointing to the $1.1 billion settlement it won from the now-defunct Corinthian Colleges. She noted that Sanchez has received contributions from for-profit colleges and opposed an Obama administration proposal to tighten regulations on such schools. 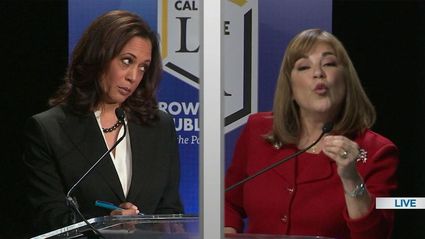 Loretta Sanchez and Kamala Harris displayed very different styles as they traded jabs at their first and only debate.

Sanchez said that Harris, who received $6,000 in campaign contributions from GOP presidential candidate Donald Trump, failed to protect residents from the now-defunct Trump University’s allegedly predatory practices. Several of the school’s students filed still-pending civil suits six years ago, while Harris received Trump contributions in 2011 and 2013. Harris has investigated the school but not filed charges.

After Trump made derogatory comments about Mexicans last year, she donated the money to charity.

Polling indicates that Harris is ahead by double digits. She outpaced Sanchez in the primary 40 percent to 19 percent. Sanchez has asked for more debates, but that seems unlikely.

At the age of 83, Feinstein is the oldest currently serving United States Senator.