Hundreds of Native Americans staged a peaceful march up a North Dakota highway Saturday, renewing their vow to stop the Dakota Access Pipeline

At least 117 people were arrested in North Dakota on Thursday as police evicted protesters from private land in the Dakota Access pipeline's path. (Oct. 28) AP

At least 117 people were arrested in North Dakota on Thursday as police forcibly removed protesters from private property in the Dakota Access pipeline right of way. More standoffs against the 1,200-mile Dakota Access pipeline continued on Friday, as questions were raised on twitter and Facebook about the fairness of police action against protestors. Comparisons were raised with the Bundy's and their standoff over the Malheur refuge.

Hundreds of Native Americans staged a peaceful march up a North Dakota highway Saturday, renewing their vow to stop the Dakota Access Pipeline in the wake of violent clashes this week.

On Thursday, state police, county sheriff's deputies from four other states and the North Dakota National Guard members made more than 140 arrests, using pepper spray, rubber bullets and Tasers to clear protesters from a camp they set up on the path of the oil pipeline, which is under construction. More than 50 people were treated for injuries.

Work on the $3.8-billion project resumed the same day.

The Standing Rock Sioux Native American tribe is suing to stop the pipeline from crossing next to their reservation, where they say it would destroy their sacred sites and negatively affect the water supply. The governors of Iowa and the Dakotas prodded the U.S. Army Corps of Engineers on Thursday to issue the permissions needed to continue construction. The tribe maintained in court that the corps did not consult it properly before moving forward.

The dispute between the tribe and the federal government has now evolved into standoffs that on Thursday escalated into a raid during which more than 140 people were arrested. Hundreds of police wearing riot gear closed in on an encampment of tents and teepees while surveillance helicopters circled overhead. Friday's activity was much more subdued however, as 50 protesters who faced military vehicles and police in riot gear in the morning evolved into quiet by Friday afternoon.

The Bakken pipeline or Dakota Access Pipeline (DAPL) is a 1,134-mile-long underground U.S. oil pipeline project for crude oil. Executed by Dakota Access, LLC, a subsidiary of the Dallas, Texas corporation Energy Transfer Partners, L.P. to begin in the Bakken oil fields in Northwest North Dakota. It will travel in a more or less straight line south-east, through South Dakota and Iowa, and end at the oil tank farm near Patoka, Illinois. According to court records, the pipeline is currently due for delivery on January 1, 2017.

The $3.7 billion project, which will create 40 permanent jobs, became public in July 2014, and informational hearings for landowners took place between August 2014 and January 2015. Dakota Access submitted its plan to the Iowa Utilities Board (IUB) on October 29, 2014, and applied for a permit in January 2015. The IUB was the last of the four state regulators to grant the permit in March 2016, including the use of eminent domain, after some public controversy. As of March 2016, Dakota Access had secured voluntary easements on 82 percent of Iowa land. 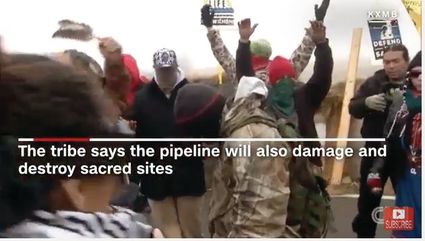 The pipeline has been controversial regarding its necessity, potential harm to the environment, and impact on climate change. A number of Native Americans in Iowa and the Dakotas have opposed the pipeline, including the Meskwaki and several Sioux tribal nations.

In August 2016, ReZpect Our Water, a group organized on the Standing Rock Indian Reservation, brought a petition to the U.S. Army Corps of Engineers in Washington, D.C. and the tribe sued for an injunction. A protest at the pipeline site in North Dakota has drawn international attention in response to the hundreds of people who are protesting the pipeline construction and the treatment that they have experienced from local authorities.