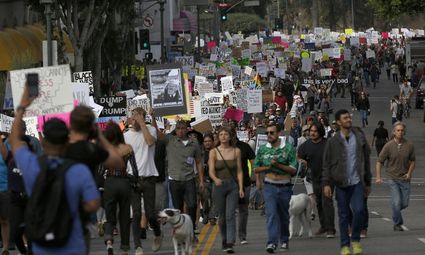 Thousands have taken to the streets.

Since last Tuesday's shocking defeat of the popularly chosen presidential nominee Hillary Clinton by the electorally chosen Donald Trump, thousands of protestors have poured into the streets in major cities across America – and that's exactly the right thing for them to do.

The electoral college system has devalued the votes of populated states to such an extent that twice in the last five elections the candidate with the most popular votes has lost the presidency.

This means a Wyoming voter has 3 ½ times more power in determining who enters the White House.

The Electoral College: A Brief History

At the Constitutional Convention in 1787, the option of a direct popular vote was defeated by Southern states because a direct vote of franchise holders would give them no credit for their slave populations.

The South proposed an indirect method with numbers reflecting each state's two Senate seats, plus Congressional seats. Congressional representation, based on population, allowed for slaves to be counted as three-fifths of a person.

The framers of the Constitution envisioned a system wherein regional voters would elect a representative to vote for them, in a way that reflected the majority choice of the locality.

Soon, state governments realized that a situation could occur in which their favored candidate might lose the federal election by just one or two electoral votes, so they began to require electors to vote with the majority vote in the state.

James Madison and Alexander Hamilton, two of the major architects of the Electoral College, objected strongly, saying the state-wide approach violated the spirit of the Constitution.

It was too late. From then until now, the electoral votes in most states are required to be cast in accordance with the majority vote of the state. The electors, originally envisioned as local representatives, became largely ceremonial party mouthpieces.

In 1878, no one could have envisioned the possibility of modern urban population densities. Construction methods, employment options, and food transportation have all contributed to a lopsided geography wherein state populations range from only 600,000 to more than 39,000,000.

Suddenly those two electoral counts based Senate seats make a big, big difference in the value of each individual human vote.

As a Constitutional measure to guarantee a chamber where the small states had an equal representation, every state has two Senate seats. Every state also has at least one Congressional seat, so, no matter how few people live there, they get at least three electoral votes.

If the state population is around 600,000, like Wyoming or Vermont, that means that each one of the three electoral votes represents roughly 200,000 state voters.

For the bigger states, like California or Texas, that means that each electoral vote represents as many as 725,000 state voters.

The Senate has always been weighted to give the states with fewer citizens an equal platform.

Now, thanks to population changes and the electoral college, the Presidency is also tilted to give those same states a greater voice.

Controlling both the Senate and the Presidency gives the low population states control of the Supreme Court, as well.

It is a situation that robs franchise value from the individual voters in states with larger populations, and it is also a situation that undermines the system of checks and balances by allowing the Executive, Legislative, and Judicial branches to all be controlled by less than the majority of Americans.

Take it to the Streets

It is a time-honored tradition for Americans to hold protest marches when they feel their needs are not being met or represented in Washington.

- In the 1890s, there were marches for employment.

The 2016 presidential election has suddenly stunned a large number of our citizens into realizing that their votes have been markedly devalued by an archaic system that was originally implemented to bolster slavery. 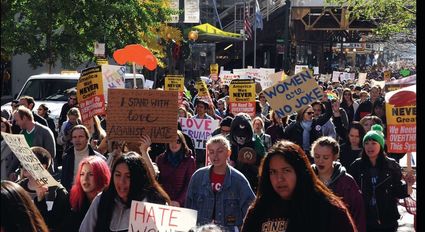 Because of those devalued votes, the woman who won our country's popular vote by a large margin is not slated to become our next president.

Instead, we are looking at a President who has a history of demeaning women and minorities. He poses an imminent threat to our health care, our public lands, and the environment.

It's a scary, scary situation.

Urban Americans don't have the ability to attain proper representation in Washington because they have lost their voter value, but they haven't lost the freedom to protest.

Without a say in chambers, their only choice is to take it to the streets.

It's time for them to march.

Until their voices are heard.