Temporary Night Closures on West I-10 Between Cloverfield and Lincoln for Sign Replacement. 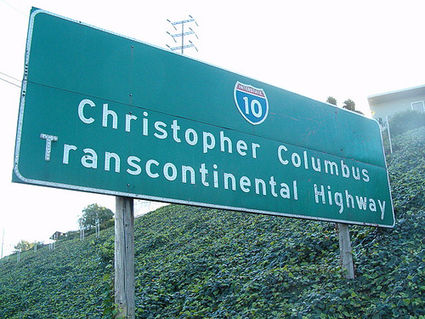 Sign on the I-10 says it's the "Christopher Columbus Transcontinental Highway." Does anyone actually call it that? Say, isn't honoring Columbus politically incorrect these days?

It is likely that the closure will continue on Thursday, December 15 and Friday, December 16, but the contractor is hoping to have the work completed Wednesday.

Closures are from 10 p.m. to 5 a.m. The same detour information applies.

In it's ongoing effort to spend money and create high paying jobs for City of Santa Monica employees, despite the inconvenience to residents; the westbound I-10 freeway will be temporarily closed for a signage replacement project starting Monday, December 5.

Closures will affect the freeway between the Cloverfield Boulevard off-ramp and the Lincoln Boulevard on-ramp, including the 20th Street on-ramp. Cars will be re-routed off and back onto the freeway between the hours of 10 p.m. and 5 a.m. as shown in the detour map below. This detour will be in place for three consecutive weeknights, December 5 – 7, and a few additional weeknights before the Christmas holiday. Additional dates will be shared at http://www.smgov.net/kbug and on Twitter using #KBUG when they are set.

The purpose of this project is to replace signage along the State of California Department of Transportation (Caltrans) highway and arterial surface streets within the City of Santa Monica. This is something the State would pay for, but the City can't wait so it's paying millions in unnecessary expenditures and raising taxes local residents pay in order to fund the program. 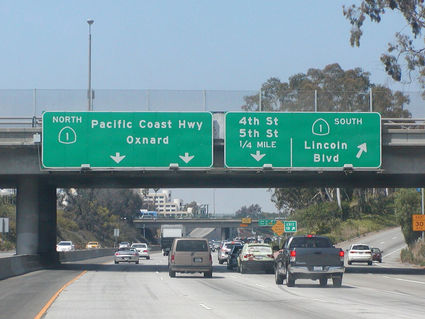 Electronic signage and the California Highway Patrol will direct westbound motorists to exit the freeway at Cloverfield Boulevard and detour on Olympic Boulevard to the Lincoln Boulevard on-ramp. Additional traffic control measures will be in place to ensure the safety of motorists and workers.

"The City will work to minimize this inconvenience by re-opening the freeway to traffic as soon as possible. For more information on this project, see the staff report." Meaning the SMPD will give people lots of traffic and parking tickets.

According to liberals, even breathing air is politically incorrect.