After 47 Years, NORMS on Pico in West LA Closes Forever on Christmas Eve

Santa Monica location closed in 2016, too. Pack n Stack Condos will be built on both sites. 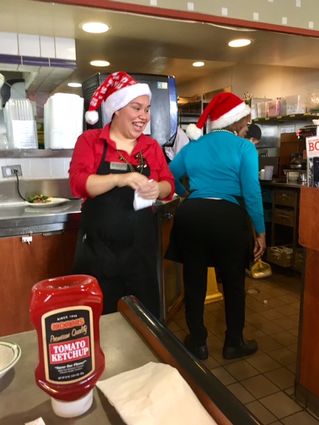 "It's sad, another LA Landmark gone, I used to come here when I was a kid growing up on Purdue," said Olga, a waitress. She doesn't know where she will work next.

NORMS Restaurant on Pico and Camden Avenue is closing after 47 years. Christmas Eve will be the last day. The large parking lots and one story googy structure will be replaced by "high end condos and multi-use retail, what else?" said David Bowman. He said that their 50 year lease had been bought out three years early.

Bowman is a NORMS manager, but not at this location. Like others in the NORMS organization, he had volunteered to help out at the overflow crowds. Many diners, like myself, were determined to get through the door and sit at the counter eating pie, one last time.

"It's sad, another LA Landmark gone, I used to come here when I was a kid growing up on Purdue," said Olga, a waitress. She doesn't know where she will work next.

Bowman put a silver lining on the story. "Since we got bought, our consistent pattern is openings rather than closings. We will open 4 stores in the next 2 years. One in El Monte, one in Long Beach on Atlantic Street, and 2 in other locations," he said.

"I've been with Norms for 44 years," said Loretta Dennis , the Area Director. She was busy hugging customers and staff on their way out the door. 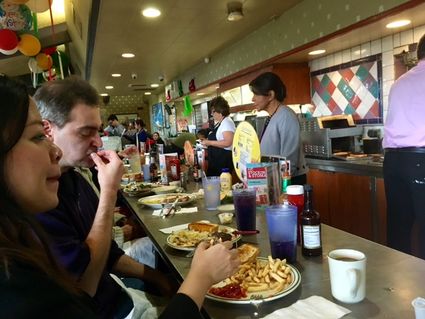 "It's sad, but the good news for us is our employees have been relocated to other locations. Van Nuys, Downey, Huntington Park, La Cienega. North Torrance on 190th, other locations." she quickly added. "And we're looking for a Westside location to open a new NORMS. If you know of one, please let us know," she said.

"It's sad news, especially around the holidays, said a customer. "It's kind of a staple of the neighborhood" said a customer named Jim, sitting at the counter.

I grew up down the street and used to play in the parking lot, on my skateboard, not long after it opened. Now the parking lots will be filled with buildings, like so many other Westside properties.

"Okay, are you ready for that brownie? Ice cream on top?" asked Loretta, removing my lunch plate for the last time.

Yay! This promoter of horrendous non-food is going away. It is a poor use of land in a growing city and, based on what they serve, a public health hazard on every front. Build mixed use on all of these cherished for the wrong reasons, woefully outdated and culturally no longer relevant relics.