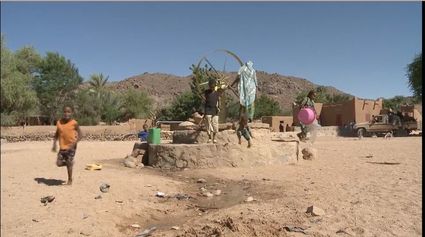 The Tuareg people inhabit the Sahara desert, in a vast area stretching from far southwestern Libya to southern Algeria, Niger, Mali and Burkina Faso. It is one of the world's most remote and little known countries.

Santa Monica Dance Studio's Benedicte Schoyen Clark recently travelled to Niger to visit Leslie Clark, Ned Clark's aunt, and the founder of The Nomad Foundation. Bringing their friend, Cooper Bates, the three of them completed a 4-week journey into the poorest, hottest and most remote place you can think of. "This is a place completely unlike anything most Westerners get to experience in their lifetime," says Benedicte Clark.

After decades of oppression, the Niger government is genuinely trying to improve the lives of the Taureg people, says Benedicte. "Now they are in peace, now at least it seems to be on a good path forward."

After a terrorist attack in Agadez 10 years ago, commercial flights connecting Agadez and Paris, ended, explains Benedicte. "All the communications with that part of the world was shut down. But in fact, they are very moderate Moslems. I promised I would help them get more tourism. They hadn't seen any white people in 7 years," says Benedicte.

"Today people in the West are terrified of Muslims. But these guys are very moderate. Every one is so nice! And it's very clean and peaceful out there, in the desert."

Leslie Clark is the director founder of the nomad foundation. She fell in love with Taureg culture years ago. Leslie now runs the Nomad Foundation, which provides medical care to nomads. "She has midwives who nomad women how to give birth in the desert, so they don't die." Leslie also runs a school for nomad children, which is featured prominently in the video. And she is an artist, who sells her work in an Ojai gallery.

Agadez is the nomad capital, explained Schoyen. The nomads have a capital? I asked. "Well, yes, they have a place where they gather, where they leave their children sometimes to take their herds out to pasture. The government has recently agreed to pave streets there."

"These nomads have cellphones now, they listen to music on their cellphones, calling each other. They don't really have internet out there, but I have a lot of Nomads who follow me on Facebook, on Roadtrip Niger," says Benedicte.

"When I started this project, I wasn't sure what I was going to make. It kind of became a travelogue, I take the audience with 3 Westerners while we teach the audience a little about the culture, we are seeing it through a Western point of view.

A year ago we did a benefit for these kids and raised $2500. And all the kids at Born to Play Productions Dance Studio in Santa Monica, exchanged pictures with the kids at the school.

Benedicte Clark is 51, her husband Ned Clark is 43. "He did a lot of the music, he got to play with the Taureg musicians. We had something in common with them, with music and dance. We didn't speak Taureg or French, as they do. But we all spoke music.

"This 70 minute film takes the audience along on an incredible journey, where no one is allowed to travel without special permits and security team," she says. They make friends with Nomadic tribes members, for whom owning a cow literally determines whether they live or die, They travelled with the Tuaregs who spent years in the desert dunes, fighting the dictatorial government during the rebellions.

In the Timia Oasis, once a flourishing tourist destination, Benedicte promises the Chief that she will do anything in her power to help promote travel to Niger, and restore the country to the status it once had: A hospitable country with a booming tourist industry. She tells him, that she will create a film which shows Niger in all its beauty, joyousness and unique, traditional artistry.

"While our group did not originally go to Niger with this purpose, it becomes pertinent for Benedicte to make a difference in the lives of the Tuareg nomads and raise awareness about this forgotten country. Road Trip Niger is the fruits of this effort."

"I spent 4 weeks there together with my husband and his aunt Leslie Clark, who is the head of The Nomad Foundation.

I made a 70 minutes long movie about our journey traveling with the Nomads to places no one currently is allowed to go. We traveled with a security team of 18 guys and bottom line it was a crazy trip in the poorest country in the world," says Benedicte, who is legendary for teaching ballet and other dance at Santa Monica Dance Studio on Pico. "Here is the link for more information and photos from the film http://www.roadtripniger.com"

"I'm excited to invite you to the premiere of my first documentary. A 70 minute film about the adventures of the filmmakers in a country as far from home as imaginable, to discover the nomadic tribes of Niger, the vast, unforgiving and breathtaking Sahara desert, and the work of the Nomad Foundation. Film, music, appetizers, no host bar & silent auction to benefit the Nomad Foundation.

AND a live sampler of music from the film with my husband singer/songwriter, Ned Clark

You can purchase your ticket here, all profit from the screening goes to The Nomad Foundation. 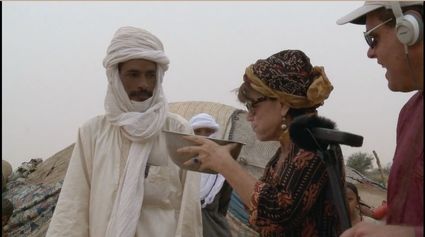 The Tuaregs have been called the "blue people" for the indigo-dye colored clothes they traditionally wear and which stains their skin. A semi-nomadic Muslim people, they are believed to be descendants of the Berber autochthones of North Africa.[9] The Tuaregs have been one of the ethnic groups that have been historically influential in the spread of Islam and its legacy in North Africa and the adjacent Sahel region.

The Tuareg have controlled several trans-Saharan trade routes, and have been an important party to the conflicts in the Saharan region during the colonial and post-colonial era. Traditionally nomadic pastoralists, small groups of Tuareg are also found in northern Nigeria.The Tuareg speak the Tuareg languages, which belong to the Berber branch of the Afro-Asiatic family.