Tiffany Trump to Sing "I'm Like a Bird" at Pres. Donald Trump's Inauguration

Youtube star will steal the show at her Dad's swearing in. Good for her!

Donald Trump's daughter Tiffany will fill in the gap at her father's presidential inauguration, after several mainstream Hollywood acts passed on the opportunity to perform in front of 63,000,000 TV viewers. She will sing Nelly Furtado's hit song "I'm Like a Bird," says a source at Mark Burnett's production company. Producer of The Apprentice and Survivor, Burnett is producing the inauguration.

It should surprise no one that Tiffany Ariana Trump, 23, an American internet personality, singer and model, will be the star of her father's inauguration. Often called the Jan Brady of the Trump clan, Tiffany is the only daughter of the President-elect of the United States, Donald Trump, and his second wife Marla Maples. She is expected to enroll at Harvard Law School in the fall. Nevertheless, she is a Youtube personality, with no less than six hits garnering more than 100,000 views.

Trump released a music single called "Like a Bird" in 2014, while attending the University of Pennsylvania. She later told Oprah Winfrey that she was evaluating whether to take her music career "to the next level as a professional". Tiffany has also worked as an intern at Vogue and modeled for a 2016 Andrew Warren fashion show during New York Fashion Week.

I'm Like a Bird by Nelly Furtado was one of the most successful singles of 2001, peaking at number one on the Canadian Singles Chart, as well as number two in Australia and New Zealand, number five in the United Kingdom, and number nine in the United States.

The song received very positive reviews from music critics for Furtado's singing and the empowering lyrics, and became one of the most critically acclaimed songs of 2001. Many also consider it to be her signature song; Furtado herself commented "There's a simplicity about it that I love," and "It's my freedom song". The song was nominated for the Grammy Award for Song of the Year and won the Grammy Award for Best Female Pop Vocal Performance, making Furtado the first female act to win the award for her debut single since Mariah Carey did so ten years earlier and the last to be awarded to a Canadian artist winner in the category. It also won the Juno Award for Single of the Year. 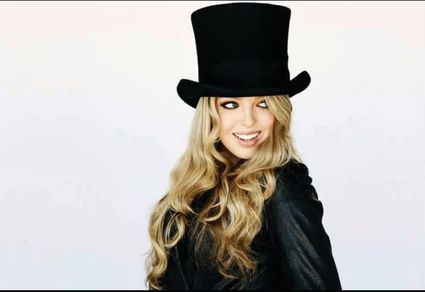 It should surprise no one that Tiffany Ariana Trump, 23, an American internet personality, singer and model, will be the star of her father's inauguration

The inauguration of Donald Trump as the 45th President of the United States will be held on Friday, January 20, 2017, on the West Front of the United States Capitol Building in Washington, D.C.. The inauguration will mark the commencement of the four-year term of Donald Trump as President and of Mike Pence as Vice President. The presidential oath of office will be administered to Trump by Chief Justice John Roberts.

News reports have stated that few performers are willing to perform at DJT's swearing in. Even a member of the Mormon Tabernacle Choir resigned in protest because of the LDS Church decision to perform at Donald Trump's inauguration. The singer, Jan Chamberlin, stated that she felt "betrayed" and that she "simply cannot continue with the recent turn of events." She stated that the Choir is "endorsing tyranny and fascism by singing for this man". More than 21,000 people have signed an online petition disagreeing with the Mormon Tabernacle Choir's decision to perform at the inauguration. According to the organizer of the campaign, most of the signatures are from members of the LDS church