Camp is located on private land 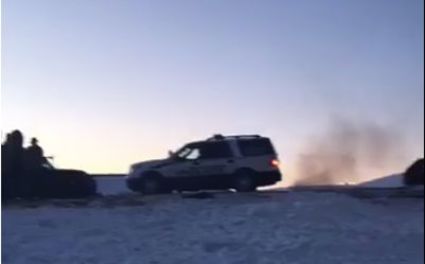 Smoke rises from the camp in the distance, as law enforcement vehicles prevent closer access tot he area.

Editor's note: The authenticity of this story is disputed, with some on social media insisting that the incident happened, and others saying it is a false report. For the moment we continue to post the story.

Police have raided the Last Child Camp at Standing Rock, arresting some and sending others out into the snow, at the same time blocking the route to the main camp.

It is currently 10 degrees F in the area.

Little information is available at this time, as streaming video has been blocked. A teleSUR news report on police activity at Standing Rock also made no mention of any camp there being set afire by police: "Police in North Dakota arrested 76 people at Standing Rock, as the Army Corp of Engineers cleared the way for the Dakota Access Pipeline to continue construction through Native American land. Water protectors had set up a new camp, the Last Child Camp, and lit a sacred fire near where construction is expected to begin any day, vowing to stop the controversial pipeline which violates the sovereign treaty rights of the Standing Rock Sioux Tribe and threatens to contaminate the water supply for millions of North Dakota residents. Armed police used bulldozers and sound cannons to destroy the camp, put out the sacred fire, and carry out the arrests. Morton County sheriff's office spokesman Rob Keller said it was too soon to say what the protesters would be charged with. The Morton County [South Dakota] Sheriff's social media accounts carried a video showing them evicting "rogue protesters" from what they described as "an illegal protest camp on private property"

It appears that police stormed the camp on Wednesday afternoon, arresting camp leaders and sending the others off in their cars, but denying access for them to retreat to the main camp. They have set fire to anything left at the camp.

Native Americans and their supporters have been camped out for months in protest of the Dakota Access Pipeline (DAPL), which threatens both their water supply and historical sites. Supporters have come from all over the world to stand beside the protesters.

Donald Trump, who owns shares in DAPL parent company Energy Transfer Partners, has ordered the Corp of Engineers to expedite pipeline construction. The legality of the order, which could bypass environmental and historical evaluations, has not yet been heard in court. Local law enforcement has chosen to use the order as an excuse to cast people out into the cold and destroy their possessions, despite the fact that the camp is located on private land and the police are trespassing.

Protests against the pipeline have also been staged by farm families whose land has been seized by "eminent domain." Eminent domain is supposed to allow the government to seize private land if necessary for the public good. That seems a tenuous argument for a Canadian pipeline that will be used to transport oil for sale to China. Law enforcement agencies from around the country have refused to send support for local police forces.

The pipeline is going to provide as few as 50 permanent American jobs. 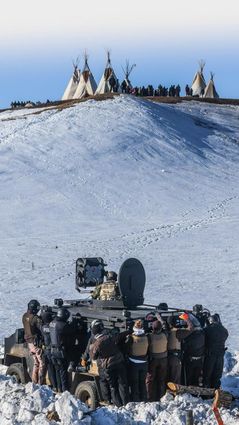 Donald Trump has filled his cabinet with big oil lobbyists and executives, and has a long personal history of investment in oil. The unofficial Steele Dossier on Trump, compiled in July, indicates that Vladimir Putin promised Trump 19% ownership of Rosneft, Russia's state oil company, if Trump became president and removed sanctions against Russia. Reuters has now reported that in December 19.5% of Rosneft was sold to parties unknown through a series of shell companies. The shell companies have been traced to the Caymen Islands, but not yet tied directly to Trump.

Actions thus far in the two-week administration indicate that Trump will support Big Business rather than average people or the environment.

fake story. it's an important issue and we need to stop this development. Fake stories like this only hurt. Do your homework. Remember when people were journalists? Snopes knocked this nonsense down five hours ago, why is this story still up? http://www.snopes.com/police-burn-standing-rock-camp/