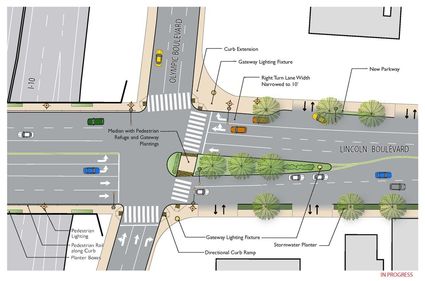 From the city's website, graphic shows the plan for Lincoln Boulevard

In what may be the most ill conceived traffic plan ever created by civil employees paid more than $250,000 a year, the City of Santa Monica is pushing a plan to narrow Lincoln Blvd into one lane in each direction. "Auto-Centric businesses" such as auto parts and mechanics, would be encouraged to leave town.

Commuters would be discouraged from using Lincoln Blvd, since it would flow at about 10 miles an hour between the 10 freeway and Ozone Avenue, 1.5 miles south.

Update: Mayor Ted Winterer's Facebook comment on this article: "Read the plan, there will be no reduction in lanes. This week a grandmother was killed in the crosswalk at Hill on Lincoln, this project will enhance pedestrian safety."

From the City of Santa Monica's website: "The Lincoln Neighborhood Corridor Plan (The "LiNC") is currently evaluating a range of short- and long-term enhancements to the public right of way on Lincoln Boulevard between the I-10 Freeway and the City limits at Ozone Avenue. Utilizing a strategy that balances tactical urbanism and the desire for "Pop-Up Placemaking" (such as the recently installed Utility Box Artwork) with long-range capital improvements like new medians and crosswalks, the Plan also incorporates a layer of policy and program level recommendations for creating a more functional, aesthetically pleasing pedestrian experience that is supported and/or managed by the local business community and property owners."

Well that's how they see it. They also say they will "Maintain and improve traffic flow" for the 50,000 vehicles who use Lincoln every day. Narrowing the road to one lane in each direction from the current two plus a center lane, will do the opposite. But I earn much less than the City Staff who dreamed this up, so what do I know.

If you want to see just how they will screw this up for all of us who live here, and make it even harder to leave town, drive on Ocean Park Blvd between 30th street and Nielson Way. That used to be two lanes in each direction. They narrowed it to one lane each way. The plan will choke traffic, create gridlock, and imprison residents and tourists alike.

If you happen to live on 11th Street, you might want to sell now. Because all that Lincoln Blvd traffic will have to go somewhere, and 11th Street is the best alternate route, as anyone who lives on the Westside knows.

This is going to happen by 2018, people. The idiots in City Hall have already decided it. They will hold public meetings as window dressing, and ten bicycle riders will show up and tell them they're godlike. Bicyclists who live in mom's basement have time to attend public meetings. The rest of us work and raise families here.

It was all over in 2015, when Santa Monica got the State to transfer the right of way from California government to local government. At that moment, it was all over for anything reasonable . Seriously, these people would plant grass on Lincoln and graze cattle there, before admitting they made a mistake narrowing it. Or in City Speak: 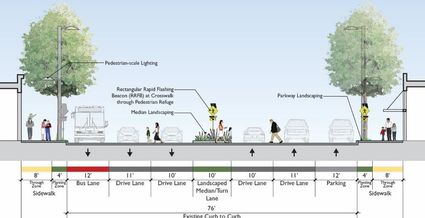 The graphic refers to phase 1. In phase 2 traffic will be reduced to one lane in each direction

"It is envisioned that the Lincoln Neighborhood Corridor Plan will result in a comprehensive framework for the overall enhancement of the Boulevard, and will weave together phased physical design improvements to the streetscape and right-of-way with policy and program level recommendations for balancing vehicle flow and demand. Envisioned to be a mixed-mode and livable street environment for pedestrians, transit and vehicles, the ability for bicycles to coexist with other modes on this busy boulevard has also been explored. Once complete, portions of the Plan will be implemented incrementally as private and public funding allows creating a high quality streetscape and pedestrian environment that removes existing barriers, expands accessibility, increases pedestrian comfort, and improves public health among all non-motorized travelers."

You can read more about the Lincoln Corridor Neighborhood Plan at https://www.smgov.net/Departments/PCD/Plans/Streetscapes/Lincoln-Neighborhood-Corridor-Plan-(LiNC)/

Besides being alarmist, close minded and ignorant the author is wrong. Lincoln will NOT be one lane. First, it will be three lanes (the parking lane becomes a driving lane during rush hours) and then becomes two. It really makes your agenda clear when you lie and try to alarm the community. Maybe you should do a little more research, speak to someone on the committee or at least use your brain and look at the parking signs. If not, just change the title to Stupid Author Makes Up Story That is Untrue!!

All these comments have some truth to them. But 2 realities must be considered. First is that populations are growing, towns are growing, and more people now live here. When I moved to Santa Monica 40 years ago, homes were small and apartments were few. But when our kids grew, we sold our big house and moved to Venice. And we weren't alone. Everyone around us moved to Culver City, Venice, Mar Vista or W.LA. Meanwhile, SM kept growing, attracting more building and more people. But many of them still work in SM, visit friends, doctors, shops. Shouldn't they be able to drive back and forth? The second reality is the steep hill on SM's southwest border. Lincoln, 4th, Walgrove and Bundy are the ONLY through streets! After SM planners foolishly narrowed Walgrove to 2 lanes,4 pm traffic takes 45 min.to go 8 blocks from SM down the hill to Sunset Pk and Venice. Residents are aghast at the stupidity of the decision. And now they want to narrowing Lincoln! Cutting off SM will kill the town.

Thank you for this article. This was all predictable when the $250,000geniuses convinced the Santa Monica public NOT TO PASS PROP LV. Now these geniuses who run the City Government are unhinged and plan to continue to reduce the livability of Santa Monica. We currently have two Governments that are running wild-- the left-wing ideologues in Santa Monica and the right-wing ideologues in Washington, DC. And we're still the greatest country in the world!!

Ocean Park is a good example of the single lane in action. What once was a flowing artery has become a parking lot. Lincoln needs something. Perhaps one of Elons underground tunnels.

I disagree with the author. I applaud the city for improving the life of its residents along Lincoln. I only wish that phase two of the plan could be accomplished more expeditiously so that all of us may enjoy the enhanced benefits of this phase sooner! Honestly, there are few places on earth as special as Santa Monica and this plan's implimentation will help ensure that this continues to be true for generations to come.

Hey Santa Monica Don - we're both correct but... Self driving cars WILL be/be considered public transportation. And they will run and be programmed to avoid the gridlock that human error (both drivers & planners) causes and need far less lane space. Hopefully, in crowded downtown areas, they will run on the equivalent of tracks, actual or virtual.

What a moronic article that seems like it was written by a petulant little boy. I applaud the city and planners for trying to make Lincoln more than a super highway so people like the author can commute faster between SM and Venice. Many families live on both sides of Lincoln, pay lots of taxes and have seen Pico, Ocean Park and others improved while we have waited for years. There is no reason Lincoln cant attract pedestrian and family friendly businesses and be a place that we could use for something other than an oil change. The plan calls for dedicated bus lanes and bike lanes! This will DECREASE commuter times on this route. Maybe you should step away from your computer and get on a bike or a bus to travel down Lincoln? You would be doing all of us a great service.

Too bad it's in a free society where people can come and go in cars as they please. This plan will only make driving horrible and not reduce the number of cars just increase the number of rage events.

nomorecars No, the author is right. Your stupid idea ignores the fact that as soon as self driving cars become ubiquitous, people will no longer need public transportation. But they will need roads.

What dumbass thought this was a good idea? I live on 9th and Broadway. I travel on Lincoln Blvd every single day. This is the most stupid arse plan that I have ever seen.

Hi, this is stupid. But for the wrong reasons. They should CLOSE Lincoln and turn it into public transportation lanes only (bike lanes/bus/trolley/light rail). Instead of accommodating more cars bringing more traffic, lets not, increase the rate of the horrendous gridlock we live with daily and speed up the development of a more pedestrian, bike and public transit city. Continuing attempts to welcome cars will be overwhelmed by more cars - we have enough gridlock already - lets make is worse quickly so less cars come!