'Punk Rock' will rock your world in ways you never imagined. 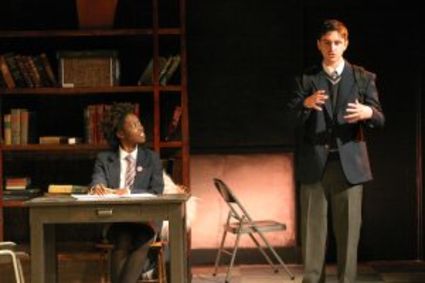 The setting is a pleasant British prep school where a small group of divergent young men and women gather to exchange words, dreams and ideas. At first the banter is light, a bit sassy and often funny. Much of the initial conversation centers on the relative merits of moving on to Oxford or Cambridge.

There is a new girl on campus that instantly captures the attention of most of the guys. After all she is young, pretty, female and new. There is the obligatory nerd and the grade obsessed girl. There is the wise cracking bully and the one guy who is somewhat of an enigma. Their verbal exchanges are fun and interesting but the path is not at first clear.

But as the show goes on "Punk Rock" slowly but inevitably evolves into something that becomes increasingly dark and foreboding.

It is this transformation that discloses a very deep angst amongst most of the group which is perhaps representative of the current state of affairs with the young men and women of our modern world. The slightly rude even funny bully becomes something far more aggressive and dangerous. The nerd releases his thoughts on the future of mankind and they are very dim yet unfortunately well supported. The enigmatic guy becomes increasingly agitated when he discovers that he has been jilted by the new girl.

The end is not all that surprising but it is well executed and watching it play out will rip at your heart, mind and soul. If you have an interest in such things watching "Punk Rock" may very well conjure up memories of Adam Peter Lanza who came to the world's attention in 2012 or Christopher Sean Harper-Mercer who gained infamy in 2015. Don't remember those names? Well their stores and dozens more are revealed in detail in the very powerful book entitled "Mass Murders in America" available here: http://www.lulu.com/shop/ron-irwin/mass-murders-in-america/paperback/product-22544998.html. 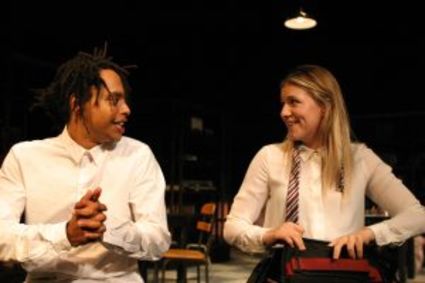 Jacob B. Gibson and Miranda Wayne in PUNK ROCK at the Odyssey Theatre LA

But the play known as "Punk Rock" is available right now through May 14th at The Odyssey Theatre, 2055 S. Sepulveda Boulevard, Los Angeles, California 90025. Show times are Wednesday through Saturday at 8:00 p.m. and Sundays at 2:00 p.m. Wednesday shows April 12th and May 3rd only and Thursday is only April 27th. Reservations and ticketing available by calling 310-477-2055 or online at: http://www.odysseytheatre.org.

This play is superbly executed by a very excellent cast and it deserves your attention for it does touch upon areas that dearly do require our true and full attention. While the end portrayed is not all that common one such experience is all anyone needs to be forever removed from the equation.

For a different art form check this out: https://www.artpal.com/drcommunicator/