Poisoned Milk: A powerful performance with the Right Nuance at WeHo's Lounge Theatre 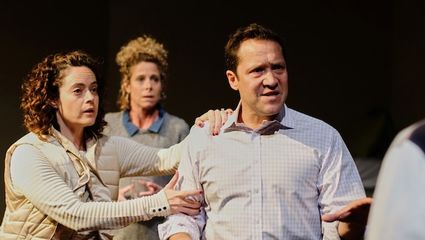 The story begins with a rather convoluted and often hilarious conversation between two sisters during which one sister admits to her sibling that she recently punched another woman in the face. But this is only the beginning because next is the clearly distressed husband trying and failing to regain some amorous activity with his wife. There is obvious and abundant stress in this family to the point where labeling them dysfunctional could be considered an understatement.

That is where my mind immediately thought of Aleppo where dozens if not hundreds of children have recently been killed by bombs and gunfire leaving behind deeply grieving families. How any family so deeply hurt is eventually able to "move on" as we say is at the core of "Rabbit Hole." But because there is abundant pain there is also abundant humor as humor grows from pain.

At one point the young man who was driving the car that struck and killed the little boy makes his appearance at the home of the grieving family. That character was brilliantly portrayed by Rocky Collins. Rocky has earned TV and film credits but this is his first appearance on stage and it is a powerful performance with just the right nuance.

A critical pivotal moment comes when the grieving mom, played by Jordana Oberman finally has a moving meeting with the young man who was driving the car. As this story progresses there is an apparent escalation of violence; first the sister in the bar and later the mother in a grocery store both striking other people. 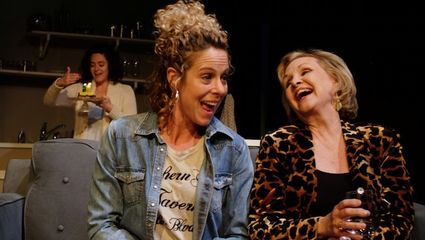 So when the mother and boy meet the mother is very insistent on offering the boy a glass of milk and I was sure the ending would be the boy dying from poison she put in the milk. That is not what happened, but it becomes clear that that meeting was much needed and highly transformative.

If you enjoy highly emotional drama coupled with abundant comic relief you will love "Rabbit Hole." The show does grab you and hold you for the entire two hours. Do, however, leave the young [under 13] and highly sensitive at home.

"Rabbit Hole" is playing now through May 14th at The Lounge Theatre, 6201 Santa Monica Boulevard, Los Angeles, California. Show times are Friday and Saturday at 8:00 p.m. and Sundays at 7:00 p.m. Information is available by calling (917) 407-3346 and online ticketing is available at: http://www.Plays411.com/rabbithole.

Why would you still title your review, Poisoned Milk, when that is obviously NOT what happens in the play? It's silly and misleading.