Free Outdoor Music-Making Events to Kick Off Summer in Los Angeles and Over 50 U.S. Cities 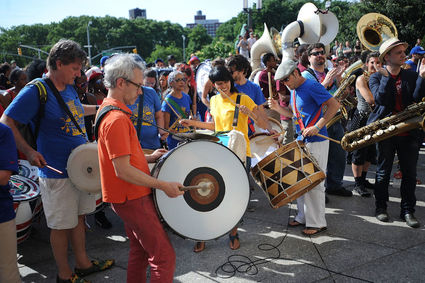 Completely different from a typical music festival, Make Music Day seeks to encourage all people to experience the pleasure of making music. Every kind of musician – from bucket drummers to opera singers – pours onto streets, parks, plazas, porches, rooftops, gardens and other public spaces to share their music with friends, neighbors and strangers.

Make Music Day, which began in France in 1982 as the Fête de la Musique, has since grown to include more than 750 cities across 120 countries – and is presented in the U.S. by The NAMM Foundation and coordinated by the nonprofit Make Music Alliance.

- Ella Fitzgerald Piano Bar – In New York City and Los Angeles, in celebration of the 100th anniversary of Ella Fitzgerald's birth and presented with support from the Ella Fitzgerald Foundation, a piano will be transported on a pickup truck to multiple locations that have deep connections to the jazz icon including the National Jazz Museum in Harlem and her old neighborhood in Beverly Hills. At each stop, members of the public will be given songbooks and invited to sing their favorite Ella song with live piano accompaniment.

- Boomwhackers – In an "MP3 Experiment" produced by Improv Everywhere, over 3,000 participants in New York's Battery Park will download an MP3 track that provides a kind of narrated adventure experience featuring Boomwhackers, which are colorful plastic tubes. By following the narration on the MP3, they will make music together by hitting the Boomwhackers against nearby objects. Ten other cities will also stage excerpts of this MP3 Experiment.

- The Gauntlet – Choirs in New York City, Chicago and Providence (RI) will perform composer Sxip Shirey's 2016 piece, where two rows of 30 singers engage in a musical dialogue as audience members immerse themselves by walking, at their own pace, through the rows of paired singers.

- Lift Every Voice: Musicians Rising For Racial Justice – Performances of Samuel Barber's "Adagio for Strings" and George Walker's "Lyric for Strings" will be held in Boston, Chicago and Cleveland.

- WTC @ WTC – In the spirit of contemplation evoked through the repertoire and the setting, four grand pianos at the four corners of the World Trade Center Memorial Plaza will stage performances of music from J.S. Bach's "Well Tempered Clavier" by a rotating cast of professionals and students.

Other events around the country will highlight the musical history and ingenuity of each city including:

- San Jose, CA – The Santa Clara Valley Transportation Authority will host a music crawl on the light rail with performers and food trucks at different stations

- Madison, WI – an Otis Redding-themed "Go Big Sing" will be held at the lake where the famed soul singer and six others died in a plane crash 50 years ago

- Davis, CA – a sing-along will be held in Central Park to mark the city's centennial

- Washington, DC – musicians will unite together in the nation's capital and globally to simultaneously perform the peace anthem, "Set Me Free"

- Buffalo, NY – musicians will play inside the Marine A grain elevator at historic Silo City

- El Paso, TX – local musicians will be joined by their counterparts from Juarez, Mexico, to make music together across the border

Highlights of Make Music Day in the U.S. will also include Sousapaloozas in Chicago, Cleveland, Madison, Minneapolis-St. Paul, New York and San Jose that bring together hundreds of brass and wind musicians to play the music of John Philip Sousa; Street Studios in Atlanta, Chattanooga, Minneapolis-St. Paul, New York and Philadelphia where DJs and producers bring their gear and engage passersby in the spontaneous, collaborative production of original music on the street; and over 150 Mass Appeals across the country that gather musicians to play together in large, single-instruments groups. Instruments with Mass Appeal events include guitars, harmonicas, accordions, flutes, percussion, trombones, bassoons, French horns, synthesizers, ukuleles, djembes, harps and voices.

All Make Music Day events are free and open to the public. Participants who wish to perform, or to host musical events, may register at MakeMusicDay.org. A full schedule of events will be posted on the website in early June.

About Make Music Day- Held annually on June 21 to coincide with the summer solstice, Make Music Day is part of the international Fête de la Musique, taking place in more than 750 cities across 120 countries. The daylong, musical free-for-all celebrates music in all its forms, encouraging people to band together and play in free public concerts. This year, 50 U.S. cities and the entire states of Vermont and Rhode Island are organizing Make Music celebrations, encompassing thousands of music making opportunities nationwide. Make Music Day is presented by The NAMM Foundation and coordinated by the nonprofit Make Music Alliance. For more information, please visit http://www.makemusicday.org. View the Make Music Day sizzle reel: https://www.youtube.com/watch?v=ilj4sN2rQrE