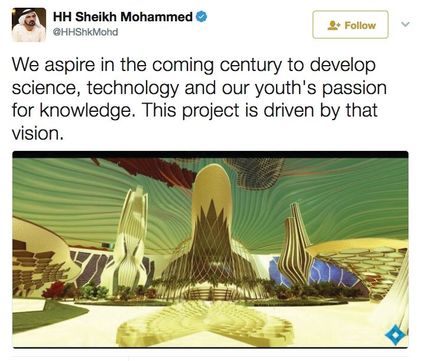 While the United States increasingly puts science on the back burner, the United Arab Emirates is forging ahead with an ambitious program meant to increase knowledge and economic opportunities for its citizens.

No Arab state has ever launched a spacecraft, but UAE intends to launch its first space probe in 2021 to celebrate the country's golden jubilee. That probe, named Al Amal (Hope), will mark the beginning of UAE's plan to become a significant player in space exploration.

"We believe that we are on the cusp of a new age for exploration, a new space race that affects literally every human on earth," he said.

Early images from UAE indicate plans for construction of an extensive infrastructure.

Al Gergawi hopes the project will get people, and particularly young people, excited about science and interplanetary exploration.

At the January 2016 Global Art Forum, they conducted a panel discussion on their future in space, and the significance of having Arab countries enter into the 21at century Space Race.

In June 2016, UAE signed an outer space cooperative agreement with NASA. NASA reported that the agreement is "to cooperate in aeronautics research, and the exploration and use of airspace and outer space for peaceful purposes, working together in the peaceful use of outer space for the benefit of humanity."

NASA administrator Charles Bolden met with UAE Space Agency Chairman Khalifa Al Romaithi to discuss the possibility of putting men on Mars, and what that act would mean to the world. 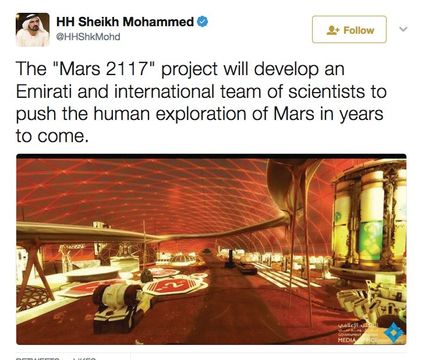 "The United Arab Emirates and the United States of America are long-standing allies and have deep economic, cultural and diplomatic ties," said Al Romaithi. "We at the UAE Space Agency genuinely welcome the opportunity to collaborate and work with the USA and NASA in the fields of aeronautics, space science, and the peaceful exploration of outer space toward the common goal of fostering the well-being of humankind."

Al Romaithi noted the financial, scientific, and humanitarian benefits that could come from international collaboration.

"We believe that working alongside international partners is the best way to accelerate the development of space technologies and the space sector within the UAE," he said, adding "The space sector serves as catalysts for economic development and diversification, creating job opportunities and enabling scientists and engineers to become leaders of an industry that can bring huge benefits to our daily lives."

I assume that the author miswrote and did not intend to use genderized language. Generally space agencies - including the UAE, given their quotes and who is involved with their ongoing missions - are interested in sending _humans_ or _people_ to Mars, not just _men_. (It's only a few more letters and is much less jarring.)