After Her Mother Died, She Resolved to Fight Alzheimer's Disease With All Her Might 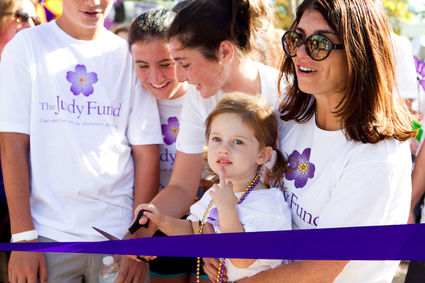 When Palm Springs native Judy Gelfand lost her life to Alzheimer's disease after her mother, Gertrude Glazer Jaffe, succumbed to the devastating disease as well, her family immediately resolved to attack Alzheimer's with all of its might.

Since taking the helm, Gelfand Stearns has taken The Judy Fund's voice a step further, localizing the fight against Alzheimer's by partnering with the Alzheimer's Association California Southland Chapter to raise funds for services here in Santa Monica and throughout LA County.

This year Gelfand Stearns will again have a Walk to End Alzheimer's Santa Monica team while also launching The Judy Fund's National Walk Team, with teams in communities nationwide.

"I became involved in the local California Southland Chapter because the chapter's main focus is caring for the people living with the disease, creating local, no-cost, incredible resources for them, and for their caregivers. I want to always support care at home in addition to the work that we do nationally for public policy and research. It is especially important because of the generational population here in Santa Monica. We have always been a community that puts a lot of resources into all generations of residents including our seniors," Gelfand Stearns said.

Because of Gelfand Stearns, the California Southland Chapter has been able to offer even more local support to those living on the Westside and throughout Los Angeles, San Bernardino and Riverside counties, said Breena F. Gold, executive director of the chapter.

"Elizabeth works tirelessly across the Alzheimer's cause," said Gold. "She and her family ensure research, advocacy and care at every level. Thanks to her advocacy within the community of Santa Monica, we are able to offer a bi-monthly support group held at Santa Monica Library, free care consultations, a 24/7 Helpline and a 24-hour online support community... And that's only a portion of what she and her fellow walkers, volunteers and supporters enable us to do."

Prior to running The Judy Fund, Gelfand Stearns was the Senior Vice President of Marketing Strategy at Universal Pictures. However, as her children grew and her mother's Alzheimer's progressed, she searched for ways to make an impact closer to home and knew that serving Santa Monica was the place to begin.

"This is such a vibrant, caring community that has genuine concern for our neighbors. The Walk is the perfect example of local activism to help care for those in need, and I invite you to join in. Walk alongside us to fight Alzheimer's and to make sure it's devastation stops with our generation," she said.

Alzheimer's is the 5th leading cause death in California, yet it has no prevention or cure. Over 5 million Americans are living with Alzheimer's, and as many as 16 million will have the disease in 2050.

"We are tackling those statistics, one step at a time," said Gold, "With Elizabeth's help and the support of this community, we'll get to our vision of a world without Alzheimer's while providing help to whomever needs it as they face Alzheimer's Disease along the way."

The Alzheimer's Association 24/7 Helpline (800.272.3900) for those facing Alzheimer's and their caregivers offers translations in 200 languages. The 24/7 online community is Alzconnected.org. To find a local resource available near you, visit alz.org/socal or call the local California Southland Chapter directly at 323.309.8821.