The Sun will turn into Darkness, and the Moon into Blood ....... 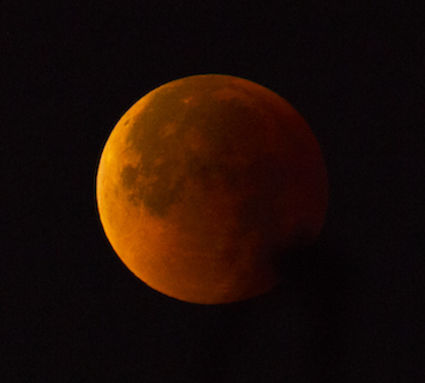 The January 31, 2018 "Super Blue Blood Moon" over Los Angeles at an early stage of totality. Photo by Daniel Margolis.

There are differing definitions of a "Blue Moon", but the most widely accepted today is that when two full moons fall within one calendar month, the second of the two full moons is a "Blue Moon". "Blue Moons" occur because each solar calendar month is 29.53 days – not a full 30 days. After a while, the time loss adds up to a full day and a second full moon occurs before the month is over. These "twice in one month full moons" occur about once every 2.7 years. "Blue Moons" are notable because they occur infrequently, not because the Moon appears bluish in color.

An earlier definition of a "Blue Moon" refers to an extraordinarily rare phenomenon wherein a high density of large smoke or dust particles in the atmosphere filter out some of the sun's red wavelengths, thereby actually causing the Moon to appear bluish in color. This phenomenon generally occurs after catastrophic wildfires or volcanic eruptions, as was the case after the 1883 volcanic eruption at Krakatoa, and more recently, Mount Pinatubo's eruption in the Philippines in 1991. Because these "Blue Moon" events are so rare, they gave rise to the idiom "once in a blue moon", which means "very, very rarely".

There is yet another explanation for the term "Blue Moon". In Old English, the word "blewe" meant "betrayer". When a "Blue Moon" snuck into the calendar year, it added a thirteenth full moon to the twelve-month lunar cycle and was seen as betraying nature.

A "Blood Moon" occurs when there is a total lunar eclipse and the Earth casts a direct shadow across the Moon. The Earth's shadow blocks out most of the Sun's rays, but some longer wavelengths get through and scatter throughout the Earth's atmosphere causing the Moon to appear a deep, dark, rusty, red-orange color.

For many, "Blood Moons" are a beautiful sight. But for others, they are fearful omens and portent evil. It is believed by some that if there are four lunar eclipses (a tetrad) coinciding with Jewish holidays, and if this tetrad comes in a period where there are six full moons in between but no intervening partial lunar eclipses, the Apocalypse has begun. Those who believe this End of Days prophecy cite the following Biblical texts:

In the Book of Joel (2:31) in the Old Testament, it says that, "The sun will turn into darkness, and the moon into blood, before the great and terrible day of the Lord comes." And in the Book of Revelation (6:12) it says, "And I beheld when he had opened the sixth seal, and, lo, there was a great earthquake, and the sun became black as sackcloth of hair, and the moon became as blood".

Pastor Paul Begley claims that the Bible predicted the January 31, 2018 "Super Blue Blood Moon" as the final sign from God and that we are now entering the End of Days. Pastors Mark Biltz and later John Hagee also preached about "Blood Moons" and the End of Days. Based on that preaching, Pastor Hagee wrote the New York Times bestseller, Four Blood Moons, which details the supernatural connection of these celestial events to Biblical prophecy. 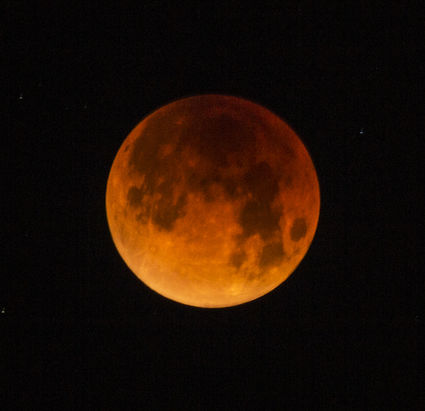 The January 31, 2018 "Super Blue Blood Moon" over Los Angeles at the height of totality. Photo by Daniel Margolis.

The term "Super Moon", which was coined by astrologer Richard Nolle in 1979, refers to the Moon when it is at its perigee, that is, the point in its orbit when it is closest to the Earth – about 226,000 miles away. Being so close makes the full moon appear up to 14 percent larger and 30 percent brighter than usual.