Brett Kavanaugh Appointed by Trump to US Supreme Court 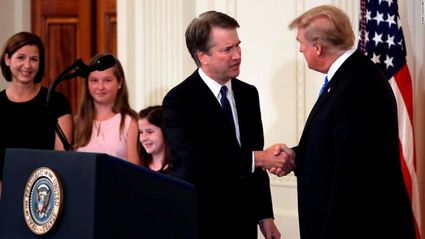 Brett Kavanaugh with his wife and 2 mischievous daughters

Brett Michael Kavanaugh, 53 currently serves as a United States Circuit Judge of the United States Court of Appeals for the District of Columbia Circuit. He was White House Staff Secretary during the Presidency of George W. Bush. 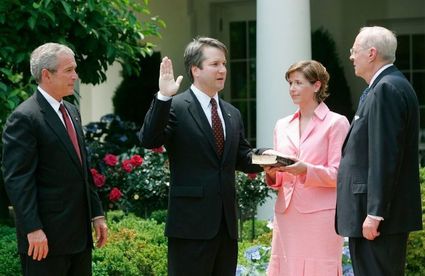 Bush put Brett Kavanaugh on the Court of Appeal

A protégé of Ken Starr, Kavanaugh played a lead role in drafting the Starr Report, which urged the impeachment of President Bill Clinton. Kavanaugh led the investigation into the suicide of Clinton aide Vince Foster. After the 2000 U.S. presidential election, in which Kavanaugh worked for the George W. Bush campaign in the Florida recount, Kavanaugh joined Bush's staff, where he led the Administration's effort to identify and confirm judicial nominees.

Kavanaugh was nominated to the D.C. Appeals Court by Bush in 2003. His confirmation hearings were contentious and stalled for three years over charges of partisanship. Kavanaugh was ultimately confirmed in May 2006 after a series of negotiations between Democratic and Republican senators.

Kavanaugh was nominated by President Donald Trump on July 9, 2018, to become an Associate Justice of the Supreme Court of the United States, following the vacancy created by the pending retirement of Associate Justice Anthony Kennedy.

Merrick Garland reportedly stuck in traffic on I-495...

Is this for real?

This whole article is a lie. Her husband's name isn't even Max, it's Jesse.

i dont see other media reporting this...

What is the verification that (a) Judge Barrett is travelling and (b) the others are not travelling. Photo of family travelling accompanying story would be great. Info about chartered flight, etc. Can anyone verify where the other possible nominees are?