A bit farther into the open sea, Captain Joel unexpectedly slowed down the boat 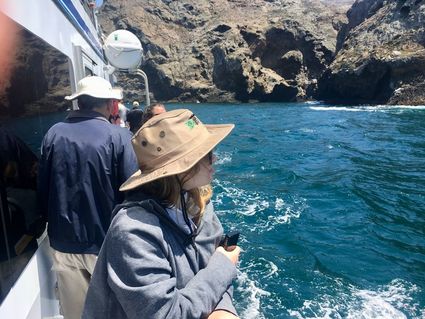 The author at Santa Cruz Island, California's largest island with 96 square miles. Island Packers can take you there.

Island Packers Cruises sends cutting-edge, environmentally-conscious vessels bearing experienced crew and curious guests to explore the unique wildlife of the Santa Barbara Channel, its islands and protected waters. The Ventura-based company offers a variety of guided trips, including summer and winter whale-watching, harbor dinner cruises, and disembarcations to explore the Channel Islands, with their endemic foxes and topographical natural-artworks such as the Painted Cave, one of the world's biggest sea caves. They have recently added some exciting new opportunities, such as a cruise to Fry's Harbor, a Nature Conservancy-owned part of Santa Cruz Island that until recently was closed to the public.

I recently had the opportunity to ride on the Island Explorer, along with a group of about twenty to thirty other visitors of ages ranging from seven to seventy-seven and coming to Ventura from origins as diverse as Montréal and Sweden. We all came for one goal: to see whales. While Island Packers cannot guarantee sightings of any particular animal – the animals aren't on contract with the cruise company, after all, and are free to hang out wherever they please – the crew are knowledgeable and the captains skilled enough that there is a good chance of seeing some form of interesting wildlife. And, thanks to marine protective laws that have gone into effect over the last several years and decades, the volume and diversity of species is on an up-trend, reflected in the optimistic attitude of the tour narrator.

Soon after Captain Joel pulled out of the harbor, he pointed out a carpet of female California sea lions lounging on a red buoy like they owned the place. The yawning creatures couldn't have been less impressed by our presence, but their very existence is testament to the effectiveness of no-take zones that have prevented fishers from removing the fish that feed these animals and allow them to produce the rich milk that feeds their pups, and it was a start that bode well for our excursion.

A bit farther into the open sea, Captain Joel unexpectedly slowed down the boat (which can clip along rather quickly without harming the environment thanks to an efficient hull shape and diesel fuel). "We're going to do wildlife a favor here," he remarked, as Paige and Paul, the other crew members on the trip, operated rescue equipment to retrieve a popped mylar balloon that was floating on the water's surface. Joel took the opportunity to educate us – briefly, without the dreaded blameful attitude that some environmental educators unfortunately employ and accidentally turn off offended listeners through doing so – about the importance of popping balloons and throwing them in the trash rather than allowing them to drift to the ocean, where they resemble moon jellies to sea turtles and the bits of plastic paint flaking off get mixed up in the plankton that other creatures eat.

Karma caught up with the boat fast – as fast as a pod of common dolphins, about forty strong. As the wild, free creatures danced upon the waves and drew interweaving arches against the blue sky, the crowd cheered. Though these dolphins were not trained or owned by humans, they were excited to interact with us on their own terms, showing us their innate behaviors rather than inculcated ones; this was, in my view, the ideal expression of dolphin-ness out in nature. 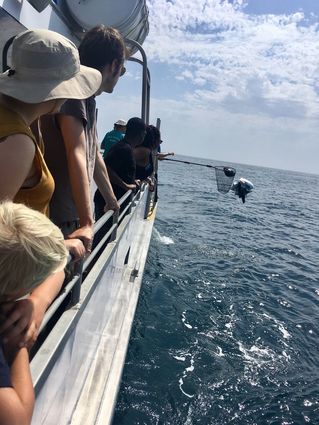 If Island Packer's sees trash, in this case a mylar balloon, they will scoop it up

And of course, we saw whales as well. Nineteen blue, about a half-dozen fin and a couple of minke. You do not know whales until you are close enough not only to see their signature tail flukes waving goodbye at the top of a dive, but also to hear the whoosh of air sniffing out the blowhole at several hundred miles per hour and to smell the sulfurous scent of the biggest poop on the planet – the turd of a blue whale. And this natural waste product, like the mylar balloon, became another type of teaching tool – Captain Joel took the opportunity to explain to us how the conservational status of baleen whales and krill are intertwined. Recent research has brought to light the fact that, while whales depend on krill as a food source, krill depend on whale poop (the undigested remains of their own kind) to enrich the water with the concentrated iron that the krill food – phytoplankton – need in order to multiply and produce blooms, a.k.a. feasts for the krill, which then enjoy reproductive success and perhaps less-enjoy becoming feasts for large baleen whales. In other words, the krill's prey feeds on the poop of the krill's predator, which poop contains krill. Typical marine fulsomeness, but it seems to work for them, and the pinnacle of the pyramid it creates – the whales – provide a picturesque, poetic example of how marine protection can boost human economies, creating opportunities for companies like Island Packers Cruises to exist and make money off whales alive rather than dead, as the shriveled whaling industry of the last century can attest.

Great article. Wish I'd been there!