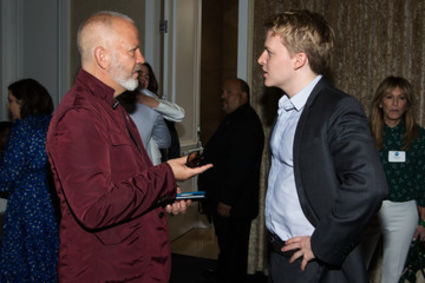 The Hollywood radio and TV, gathered at the Beverly Hilton on July the 18th to have a rare conversation with Ryan Murphy moderated by Ronan Farrow. Murphy who is best known for hit shows like Glee, American Horror Story and American Crime Story took to the stage to discuss love, politics and life.

Ronan farrow, the moderator is a Pulitzer winning for his ground breaking work in the piece he wrote for the New York Times, breaking the Harvey Weinstein story.

Murphy is just coming off a career high by signing a Netflix deal, the largest in his career ever and his latest TV show pose being the highlight of his career.

His latest creation, Pose feature a largely trans gender cast, a first for any major network in the US. It is definitely a step in the right direction considering the narrative going on about the lack of representation and an increase in depression, suicide among the trans groups.

"I'm just so moved by [the cast] as a community. They have struggled and have such difficult lives in so many ways, so to be able to give them a place in the world and an active love and a network to be on, to be on magazine covers and to be seen, particularly with the president that we have, is an amazing gift in my life, let alone that I could give back to them," Murphy said.

Ronan farrow is no shrinking violet to controversy and pushing the envelope. The journalist earlier broke the story in the New York Times about Harvey Weinstein's accusations about abuse of power and was an invocation to what became the metoo movement.

Hollywood is very interesting with the post me too and post Weinstein era. "I'm not interested in shock value anymore I've gotten away from sexuality and violence and how far I can push the envelope", Murphy said.

Murphy shared with the audience his new initiative, half foundation, a cause that promises to get more work for minorities, including women.

In an time when diversity is a hot topic with minorities still gravely underrepresented in TV and film industry, murphy has set a precedence by hiring the largest Trans cast for pose and ensuring that 65% of the TV episodes are helmed by women. He remarks that when a woman is on set, especially behind the camera, she is more likely to be inclusive and pose the question: "what do you think?" They understand that this is a collaborative effort one needs to have the space to feel safe, included and be able to take risks ultimately resulting in a better content in the end.

Never one to shy away from politics on controversy, Murphy even joked that he thought of an ingenious idea to have a character in spired by a young Donald trump. But after meditating on the idea, the decided against it, citing the reason that he just did not want to see that face or hear that voice on set and pollute something eh deemed beautiful!