Over the Line: Bowling Alley Doomed by Developer, Last of its Kind on Westside

Bowlmor lanes to give way to...... well, you can probably guess. Apartments, mixed use, bleh 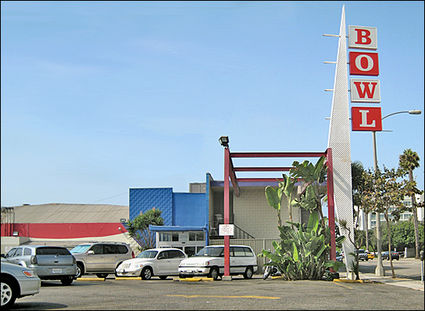 Bowlmor Lanes will be bowled over and replaced by $10,000 a month apartments, and more retail no one wants.

You were over the line, Smokey

The bowling alley across Pico Blvd from the Santa Monica Civic Center will be bowled over by a wrecking ball next year, and replaced by a mixed-use apartment complex. This according to the agenda of this week's meeting of the Santa Monica Architectural Review Board.

GRT Portfolio Properties owns the property at 216-234 Pico Boulevard. Like every other landlord in Santa Monica with a building built prior to 1998, they intend to tear it down and construct something MUCH denser.

They propose a three-story building containing 105 studio, one, two and three bedroom apartments. Which means it will be pretty much identical to Lincoln and Colorado, Lincoln and Broadway, anywhere on 7th, 6th or 5th Street South of Wilshire and North of Olympic, 23rd and Colorado across from the DMV, and any other building constructed in Santa Monica in the last 5 years, which is to say, like 200 large buildings.

The proposal includes eight "affordable" units which will go to friends of the developers, 10,803 square feet of ground-floor commercial space, and a two-level, 231-car basement garage. Because there's just so much unmet demand for local retail space.

Frederick Fisher and Partners designed the development. It will consist of two clusters of buildings framing a central courtyard.

An existing "BOWL" sign will be preserved and incorporated into the new development.

How did it even last this long, bowlers will wonder.