Senator John McCain dead at 81. His Friends and Enemies Laud Him

Arizona Senator battled Glioblastoma for a year, but could no longer bear the treatment. 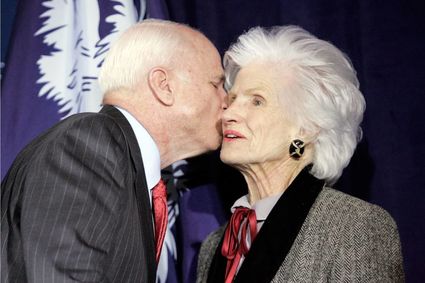 Senator John McCain of Arizona, who has resisted a glioblastoma for 12 months, will no longer be undergo treatment, reports the New York Times citing McCain's family. Meghan McCain announced that he was discontinuing treatment on Friday, a sign that the Republican senator is most likely entering his final days.

The Republican nominee for President in 2008 described his opponent, then Sen. Barack Obama as "A good man." He has objected repeatedly to the tone and tenor of the Donald J Trump campaign and administration. But he has not seen Washington since December 2017.

"Last summer, Senator John McCain shared with Americans the news our family already knew: He had been diagnosed with an aggressive glioblastoma, and the prognosis was serious. In the year since, John has surpassed expectations for his survival. But the progress of disease and the inexorable advance of age render their verdict," the family said in a statement. "With his usual strength of will, he has now chosen to discontinue medical treatment."

Mr. McCain, 81, had been undergoing treatment since July 2017. McCain's family and friends have gathered in Arizona. They say his death is imminent.

McCain is the son and grandson of Admirals, made famous as a captured US Navy fighter pilot during the Vietnam war. He was tortured by the Vietnamese periodically during 7 years as a POW, but would not turn on the US or even return home from confinement. He thought to do so would demoralize the other US war prisoners that the sone of an admiral was being sent home before them.

This image includes the military service of both himself and his family, the circumstances and tensions surrounding the end of his first marriage and beginning of second, his maverick political persona, his temper, his admitted problem of occasional ill-considered remarks, and his close ties to his children from both his marriages.

McCain's political appeal has been more nonpartisan and less ideological compared to many other national politicians.

His stature and reputation stem partly from his service in the Vietnam War.

He also carries physical vestiges of his war wounds, as well as his melanoma surgery. When campaigning, he quips: "I am older than dirt and have more scars than Frankenstein."

Writers often extolled McCain for his courage not just in war but in politics, and wrote sympathetically about him. McCain's shift of political stances and attitudes during and especially after the 2008 presidential campaign, including his self-repudiation of the maverick label, left many writers expressing sadness and wondering what had happened to the McCain they thought they had known. By 2013, some aspects of the older McCain had returned, and his image became that of a kaleidoscope of contradictory tendencies, including, as one writer listed, "the maverick, the former maverick, the curmudgeon, the bridge builder, the war hero bent on transcending the call of self-interest to serve a cause greater than himself, the sore loser, old bull, last lion, loose cannon, happy warrior, elder statesman, lion in winter...." 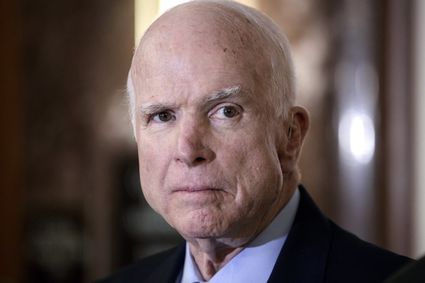 John McCain as Chairman of the Senate Armed Services Committee

In his own estimation, the Arizona senator is straightforward and direct, but impatient. Other traits include a penchant for lucky charms,[393] a fondness for hiking,[394] and a sense of humor that has sometimes backfired spectacularly, as when he made a joke in 1998 about the Clintons widely deemed not fit to print in newspapers: "Do you know why Chelsea Clinton is so ugly? – Because Janet Reno is her father."

McCain subsequently apologized profusely, and the Clinton White House accepted his apology. McCain has not shied away from addressing his shortcomings, and apologizing for them. He is known for sometimes being prickly and hot-tempered[401] with Senate colleagues, but his relations with his own Senate staff have been more cordial, and have inspired loyalty towards him.[402][403] He formed a strong bond with two senators, Joe Lieberman and Lindsey Graham, over hawkish foreign policy and overseas travel, and they became dubbed the "Three Amigos".