Disrupting Snail Mail: What if Direct Mail Behaved Like a Digital Channel? 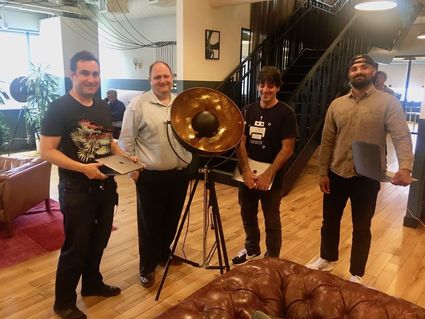 The digital age has rewritten the script for (some would call it disrupted) industries from newspapers to automobiles. What about direct mail, those advertisements on pieces of actual paper one sorts through twice a day, once at work and again at home? One would imagine that business would be affected the most.

Enter David Fink, a 20-year veteran of consumer startups. Fink describes himself as falling in love with entrepreneurship in the age of technology. Fink thought he could apply the marketing techniques used for digital advertising to the real-paper, snail-mail business. He thought there had to be a way to use all the data available to reach a potential customer and deliver to the advertiser the most bang for the buck. "It's super crazy how antiquated the industry is," Fink says.

So in 2016, Fink and Jonathan Neddenriep started a company called Postie. They were both former executives of Santa Monica-based incubator, Science Inc. (Science Inc. helped launch major DTC brand Dollar Shave Club, among others.) The initial five-member team were all digital marketers who'd started their careers in the era of Facebook and bannerhead digital advertising. Their idea was to use the same technology as online advertising giants Google or Bing in order to identify the individuals most likely to become customers. The difference in how these customers are reached via Postie is that instead of bannerhead advertisements on the webpage they're viewing, they receive physical mail.

"The company has been profitable since day one," says Fink. In addition, the company began as self funded. Today, Postie employs 20 of what Fink describes as "the best people." They're working from Denver, Las Vegas, Scottsdale, and Washington DC. "There are days I wish we were all in the same building," says Fink, "but I wouldn't trade the talent we have at Postie in order to centralize somewhere."

"We're a data and technology platform with a mission of making direct mail behave like a digital channel." Although Postie only deals with direct mail and no other type of media, they find most of their clients are companies that otherwise do online marketing. "Our clientele is heavily dominated by e-commerce companies: the mattress, clothing and apparel, footwear, skincare, and beauty," Fink reports.

Postie's mission is to find their client's customers. "You know the traditional tome of advertising agencies is 50 percent of my marketing budget is wasted; I just don't know which 50 percent." Tech marketing attempts to eliminate the wasted 50 percent.

One way Postie does this is by individualizing the actual pieces of print a customer might receive. This is done via digital printing. "With offset printing, you're very limited. Everyone gets the same piece," Fink explains. "With HP and Xerox innovations in industrial printing, each piece can be different." Using this printing technique - together with Postie's proprietary software - Postie personalizes each article of mail delivered. "Wouldn't you be more likely to respond to ads that felt appropriate to you?" Fink asks.

All of this personalization requires data, of course. Personal data. Fink recognizes the sensitivity of the acquisition and storage of personal data. Fink says the common perception is that digital data harvesters like Google want to know what you're like as an individual. He claims this is not true. They don't want the liability of storing your data. Instead, they use equations to figure out the probability of you reacting to their advertising.

"We deal with aggregate-level data. We're very sensitive about that. You have to be on the right side of privacy and security," Fink says. "We're always willing to give up some data to treat consumers the way they want to be treated."

Toward their clients, Postie is as individualized as they are toward the end consumer. "We print mailings of a couple hundred pieces a day to a couple of million pieces. Our use is that broad," Fink says. To convince marketers that Postie's direct mailings are actually useful, they'll give a test and make it as easy as possible. Prices are on a per-piece basis.

"We drive customer acquisition," Fink claims. Their goal is to get the customer in to shop once more and to deliver the maximum number of customers to their clients per dollar.

Though he loves entrepreneurship, he admits there is a downside to an early-stage business. "You don't get any sleep. Now I have a four-year-old and a six-year-old and a wife. There are months that are really hard."