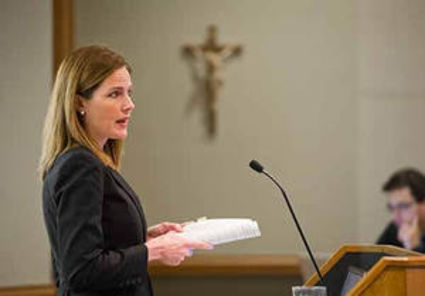 Amy Coney Barrett perfect pick for the man who regards conflict as part of the creative process.

It’s increasingly clear Kavanaugh is out. But guess who’s next?

Since his election, president Donald J Trump has consistently selected courses of action that would be in the face of the liberal mainstream media. In the Supreme Court nomination that he will announce on Monday, July 9, President Trump will again select a person condemned by the Los Angeles Times as not qualified for the position.

Amy Coney Barrett refused to call the ADF racist, when challenged by Senator Al Franken. She sparred with Senator Dianne Feinstein over Roe vs. Wade. An "Orthodox Catholic" mother of 7, Coney Barrett is the perfect pick for the man who regards conflict as part of the creative process. And according to our source within the administration, she will be the Presidents choice on Monday, July 9th.

Amy Coney Barrett, 46, is a United States Circuit Judge of the United States Court of Appeals for the Seventh Circuit who previously served as the Diane and M.O. Miller Research Chair of Law and Professor of Law at Notre Dame Law School.

According to Slate.com, the Left will attempt to defeat her by portraying her to be a part of a "Religious cult......(she) became a heroic figure to some religious conservatives during her confirmation hearing before the Senate Judiciary Committee last fall. Sen. Dianne Feinstein challenged the Catholic law professor about her religious beliefs, sneering-it seemed to many-that "the dogma lives loudly within you." With its strong whiff of anti-Catholic prejudice, the line became a rallying cry on the right.

The Washington Post says she is the one nominee who makes too much sense for Trump not to pick. https://www.washingtonpost.com/news/the-fix/wp/2018/07/02/one-possible-trump-supreme-court-pick-who-makes-too-much-sense/?utm_term=.8f91afe3c874

"This past weekend, Barrett emerged as a potential favorite to replace Justice Anthony Kennedy upon his retirement later this month. CBS News reported on Monday that Barrett and D.C. Circuit Court Judge Brett Kavanaugh are Trump's leading contenders for the appointment. Barrett is in her 40s, which means she could serve for decades, and she would be the court's only conservative woman, which some commentators have noted would make for better optics in abortion cases. (She is also a mother of seven, including one child with special needs and two children adopted from Haiti.)"

"A confrontation with the California senator during her confirmation hearing to the 7th Circuit Court of Appeals last October vaulted Barrett, 46, onto the national stage. As Feinstein pressed her on whether she would be able to render judicial rulings faithful to the law given her deeply held religious beliefs, Barrett became a hero to religious conservatives who believe liberal Democrats target them for their faith."

The President listens to Fox News, which Tuesday night issued an Opinion calling for her nomination. "To save the remaining time on his term, preserve Republican control of Congress and place himself in the best position to win the 2020 presidential election, President Trump should nominate Judge Amy Coney Barrett of the 7th U.S. Circuit Court of Appeals to fill the opening on the U.S. Supreme Court." http://www.foxnews.com/opinion/2018/07/03/trump-should-nominate-amy-coney-barrett-to-supreme-court-to-save-his-presidency.html