Santa Monica left without a check cashing place after stores closed at Pico and 17th, SM Blvd and 16th. 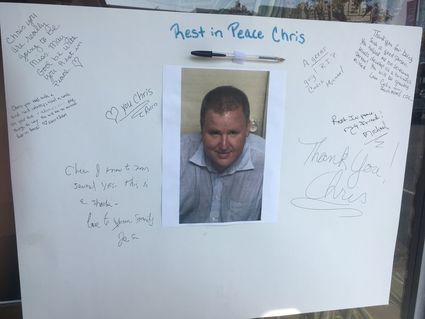 Memoriam to Chris Trigg at his store at 17th and Pico, demonstrates how many customers loved the guy.

He was a friend to the friendless and a banker to the unbanked. Christopher Trigg was also the married father of 2 young girls.

Trigg, 47, died on July 17th of an aggressive form of brain cancer. He had only been diagnosed in February, said one of his former employees. A memorial service was held in Calabasas on August 17, 2018. The store at 1705 Pico Blvd closed about 6 weeks later.

The family did not originally intend to go public with the sad news. But when the bank (Banco Popular) found out that Trigg had died, they closed the bank accounts. 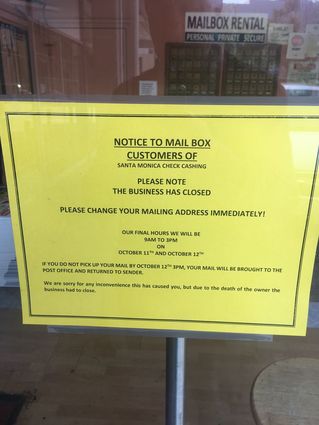 Signs on the doors of both businesses appeared in October, saying that they had closed, and instructing PO Box holders to have their mail forwarded to other addresses.

Customers remembered Trigg as a kind man who would go the extra mile to help people in need. "He was a loan shark but a loan shark with a heart," remembered one. "I can't open a bank account because I'm on Chex Systems, and once you're on, there's no way to get off. I don't know what I'm going to do now," he said.

Johnny Rocco, who runs Rocco's cheesecake next door to Santa Monica check cashing, said that "Chris Trigg was the kind of guy who would take a mother's check so she could buy milk for her children, without considering whether or not it would bounce. He always did the right thing, even when it was hard to do. He will be missed. But I know he's in a better place."