HPV Vaccines Prevent Only Some Strains, Cause 20 deaths

People question why give girls the Gardisil vaccine at all

The problem is that HPV has at least 200 strains that afflict human beings. Vaccines only prevent 10 or 15 of these strains, and while this number does include some of that cause cancer, it does not prevent others. In addition, the vaccines have numerous side effects. At least 20 depths of younger women have been documented and admitted to result directly from the vaccine. Nevertheless the vaccine has been advocated for teenage girls and boys who are not yet sexually active, since 2011.

The FDA and the CDC said that with millions of vaccinations "by chance alone some serious adverse effects and deaths" will occur in the time period following vaccination, but they have nothing to do with the vaccine.

More than twenty women who received the Gardasil vaccine have died, but these deaths have not been causally connected to the shot.

Where information has been available, the cause of death was explained by other factors. 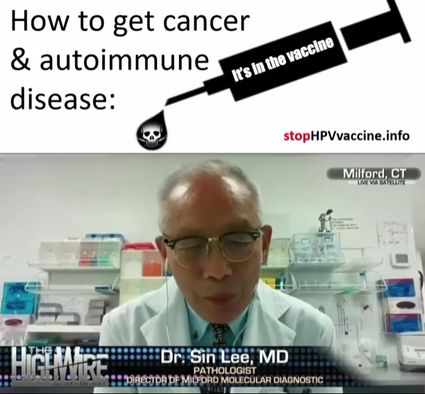 Highwire.com advocates against vaccines for children

Though Gardasil does not treat existing infection, vaccination is still recommended for HPV positive individuals, as it may protect against one or more different strains of the disease. The HPV strains that Gardasil protects against are sexually transmitted.

The vaccine was approved in the US in June 2006 by the U.S. Food and Drug Administration (FDA). The FDA approved the use of Gardasil for use in girls and women aged 9-26 In 2011, the Gardasil vaccine has also been approved in 120 other countries. The FDA recommends vaccination before adolescence and potential sexual activity.

In 2007, the Advisory Committee on Immunization Practices (ACIP) recommended gardasil for routine vaccination of girls aged 11 and 12.