An author of many physics papers, Ganezer was regarded as the father of Grand Unified Field Theories. 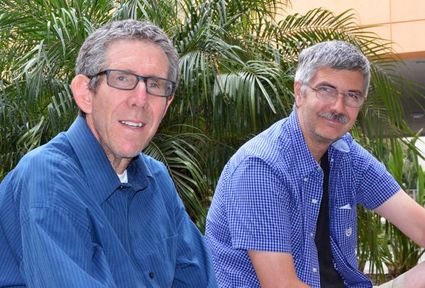 Professor Kenneth Ganezer died Thursday of complications from Vascular Dementia. He was just 65. He was a kind and gentle man and teacher, who will be missed by his many friends and students.

Ken was a physics professor at California State University Dominguez Hills from 1990 to 2016. He was renowned for his research into particle physics, and is credited with devising an experiment to prove the existence of Strange Particles.

His research into Grand Unified Field theories proved central. "The Grand Unified Field theory is the theory that the 4 fundamental forces of physics are not in fact, separate forces, but are part of the same force at a subatomic level," he once told me. He added that among scientists, "Physicists are the Deists," because "we seek to understand how God put together the universe."

Ken Ganezer graduated from University High School in 1970, where he was on the track and cross country teams. Ken loved Westwood, where he spent almost his entire life. After earning his doctorate in Physics from UCLA in 1983, Ken Ganezer worked for a time in private industry. But he came back to academia, his true passion, and is listed as the co-author of more than 200 published papers.

Ganezer co-authored the study "Search for n−n(bar) oscillation in Super-Kamiokande," which was published in the peer-reviewed scientific journal Physical Review D in April 2015. Super-Kamiokande is a neutrino detector in Japan, where Dr. Ganezer spent several summers performing research.

"One of the most important goals of modern physics is to unify the basic laws of physics into a few simple equations," he told a reporter for a CSUDH publication. "Our findings are important for physics research and physics research planning in the world, including what is going on at the Large Hadron Collider at CERN [the world's largest and most powerful particle accelerator]. The results in this paper supersede measurements that have not been updated in about 25 years and were not official until this paper was published in April."

Ken was a life long vegetarian. He was an avid marathon runner who competed in 100's of races and marathons, including the Los Angeles Marathon as recently as two years ago.

In May 2016, Professor Ganezer wandered onto the graduation stage at CSUDH through the wrong door, at the wrong time. Hundreds wondered, who is this confused older man in street clothes? Questions were asked, and he was forced into early retirement with a diagnosis of progressive cognitive decline. 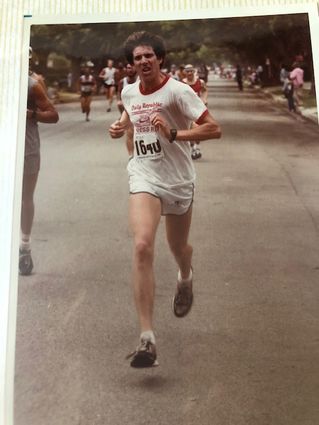 Ken's passion was running. Here he is pictured running in 1982

Ken Ganezer was later diagnosed with vascular dementia, which he fought for several years, most recently at an assisted living facility in Van Nuys. In the last several months, Ken could not dress or undress himself, or get out of bed or into it without help. Though he could still walk.

At our father Max Ganezer's funeral in 2005, Ken put his hand on my shoulder and said, "Do not be troubled. Everything that has ever existed, continues to exist at specific space time coordinates." An article of faith that theoretical physics has proven.

Ken leaves behind a wife and daughter, and six siblings. His funeral is scheduled for Tuesday, Nov. 27, 2018 at 11 am at Hollywood Forever Cemetery, 6000 Santa Monica Blvd, Los Angeles CA.

I had Ken for many physics classes in the 1990's... Quantum Mechanics, Thermodynamics among others. I even worked with him on Super-K for a short while at UCI, and presented a paper at a conference in Tucson describing our work in solar neutrino physics. He was a good mentor and a friend. I will miss him.

I ran alot of weekend AAU road races in the late 1970's and I can immediately spot Ken with his trademark running style on a out & back course. I almost was able to beat him in a 10k in Conejo Valley but he outkicked me. He also held the University High School marathon record. Rest in Peace Dr. Ken

He was a great teacher. He had a lot of passion for teaching. I mean, who lectures fot two hours after a final. Haha, so many great memories. I remember him running all over the the place on campus. I also remember finding him in a random place running at midnight. Sucks he has to go. I was planning while he was on campus but career and a new baby got in my way.

David, I am so sorry to hear about Kenny’s passing. He was one of the great Uni High Cross Country legends and as hard as I tried I couldn’t run as fast as him at Pierce. He was always great to me when we met although sadly, I never got to know him well. To hear about his accomplishments in physics are such a surprise. He was so understated with me despite being such an accomplished, brilliant man. Always respected him even though his running form reminded me more of Alberto Salazar then Mo Farah!

Thank you David for your heartfelt summary of Ken's life. Ken was always pushing to his limits. That's what you need to get a PhD. in physics, win research grants, and run a 2:38 marathon! I have fond memories of him explaining cold fusion on NPR, sounding so impressive, also grinding up steep climbs in the Santa Monica Mountains, then on the downhills explaining about neutrinos, with me pretending to understand. He is in a better place now. A Dios old friend!