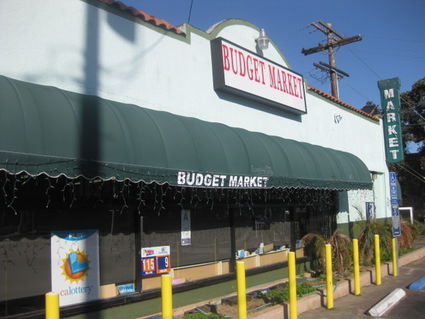 Built the same year Douglas Aircraft company opened at Santa Monica airport, the Budget Market was a holdover from another era.

It may not look like much, but the Budget Market just sold to a private trust for $3.3 million. This according to William Althouse at Westmac Realty.

No doubt the 90 year old one story retail building will give way to, well, the biggest building the developers can possibly squeeze onto the lot.

Donald Wills Douglas, Sr. built a plant in 1922 at Clover Field (Santa Monica Airport) for the Douglas Aircraft Company. In 1924, four Douglas-built planes took off from Clover Field to attempt the first aerial circumnavigation of the world. And an unknown grocer opened a corner market on 4th Street called "Budget Market."

Figure that Budget Market sells $500 a day of twinkies, bread, cans of beer and beans, and magazines. That's $180,000 gross a year. So the seller just got about 17 years of gross sales, for the property. That's a whole lot of beer and beans.

We will miss the place along with Sam and his employees. It was local, quick and friendly.