The New Years hijacking was ended in Santa Monica, by other passengers and Police 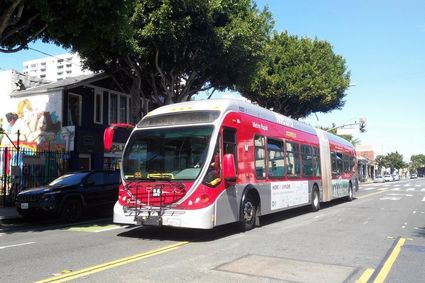 A homeless man hijacked an MTA bus from Downtown LA to the Santa Monica Promenade, on New Years Eve. Bus pictured is not the bus involved in this incident

Update: The MTA has confirmed this story.

The New Years Eve hijacking was finally ended by other passengers, the report said.

Santa Monica police have not commented about the incident, saying that the arrest was handled by the Los Angeles Police Department, which has jurisdiction over MTA buses. The post on Next Door and Facebook read as follows:

From Next Door, Nora Lerer writes regarding a bus hijacking that occurred sometime during New Year's Eve:

"I happened to be at 5th and Wilshire during this event. A homeless man hijacked the LA bus downtown, and made the bus driver take him to SM.

"As we were exiting our car to enter restaurant we heard screaming (bus driver) and witnessed a pedestrian jumping into the bus to aid a female bus driver. The pedestrian wrestled the guy off the bus and the suspect ran down the middle of Wilshire heading West.

"He was apprehended within minutes near the Promenade, but not before cops appeared from LAPD (because it was LA bus) and SM departments. Many, many cops. And lots of replacement buses. The police officers said the man who was arrested will be facing kidnapping charges in addition to other charges."

Thank you Santa Monica Observer for covering crime that involves homeless/street people. It's scary that our media has a black out regarding this group's crimes. LA Times feels like a propaganda machine for Mayor Garcetti and his decriminalization It's all about getting good statistic # so Garrett can run for president. This Hijacking news is pretty much buried and not on line apart from by Santa Monica Observer. #garcettishame

Charges will be dropped and he'll be back out on the street any day. Welcome to LA.