Kamala Harris, the Harpy of Climate Change and Poster Child of By Any Means Necessary

Harris repeats as facts climate change assertions that have been disproven, disputed or superseded. 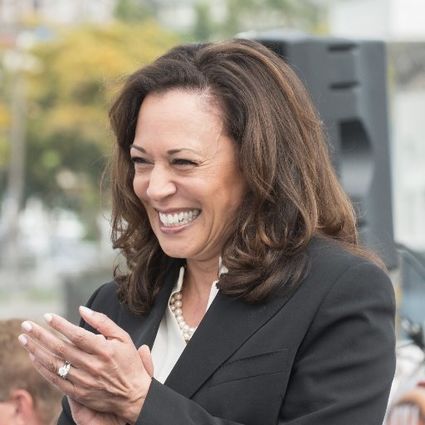 In her first campaign speech as a presidential hopeful for the 2020 election, Kamala Harris, presently the junior Senator from California, roused the crowd with her progressive agenda and enthusiastically included the now-requisite alarm sirens regarding climate change.

"Let's speak truth - climate change is real, and it is happening now," Harris told her adoring crowd. She added, "Everybody here knows from wildfires in the west to hurricanes in the east, to floods and droughts in the heartland, but we're not going to buy the lie. We're going to act based on science fact, not science fiction."

There are two problems with Harris's claim. One is that what she said is not, in fact, "truth" or "science fact." The other is that Harris has good reason to perpetuate and amplify the climate change trope - she's built a good part of her career on conspiring with environmental activists and using alleged climate change as a club to intimidate others.

First, Harris's claims about climate-change induced natural disasters has no factual basis. According to the U.S. government's fourth National Climate Assessment (NCA), there is little evidence and low confidence in tying global warming to the most natural disasters. In addition, according to a University of Washington climate scientist, there is "no credible evidence" linking last year's deadly California wildfires to global warming.

As for hurricanes, the NCA reported "there is still low confidence that any reported long-term...increases in TC activity are robust..." Similar findings are noted regarding flooding, with no "robust evidence these trends are attributable to human influences."

But Harris has made a habit of asserting alarmist climate change "facts," possibly in order to aggrandize herself and strike an image of virtuous crusader. Recently, at the Senate hearings for the confirmation of Mike Pompeo for U. S. Secretary of State, Harris grilled the then-CIA director about his lack of faith in climate change. To the bemused Pompeo, Harris repeated the oft-recited fallacy that "97 percent" of climate scientists believe there is global warming caused by human activity. Leaving aside the inaccuracy of that statement, Harris attempted to use it as a cudgel to badger Pompeo. "Do you have any reason to doubt NASA's findings?" she queried. Pompeo replied that "Frankly, as director of the CIA, I'd prefer...not to get into to the details of climate debate and science." He said that his role was to "work alongside warriors keeping America safe." In addition, he promised that the CIA would consider all threats to American security, including those that might occur from climate change. Harris's takeaway was that Pompeo's views on global warming - though it happened to be more reasonable than her own - meant he would be unable to accept and process intelligence information. Most of those who viewed her prosecutorial style of addressing the CIA Director took away an image of Harris as nastily aggressive and manipulative.

Mike Pompeo is only the latest and most well-known of Harris's climate-change victims. During her tenure as Attorney General of California, Harris went after Exxon for allegedly withholding information the oil company had about the damaging effects of fossil fuels - from as long ago as the 1970s.

According to an activist, Harris said "I'm suing them. Investigating first, then suing." Harris decided she was going to punish Exxon before she even began an investigation into whether or not they'd done anything wrong.

Perhaps because of this report of prior bias regarding the inquiry, Harris never officially began an investigation. If she had, she might have been subject to legal rebuke, as befell her fellow climate-change activist, Massachusetts Attorney General Maura Healey. After Healey publicly announced her judgment that Exxon was guilty of deceiving the public about climate change, U.S District Court Judge Ed Kinkeade issued a discovery order to determine whether "bias or prejudgment" had resulted in Healey's "bad faith" investigation into Exxon.

As it is, Harris received an admonitory letter from the U.S. congressional Committee on Science, Space, and Technology in May of 2016. In the letter, penned by Lamar Smith, the committee chair, Harris was told, "Your office - funded with taxpayer dollars - is using legal actions and investigative tactics in close coordination with certain special interest groups and trial attorneys that may rise to the level of an abuse of prosecutorial discretion. Further, such actions call into question the integrity of your office." 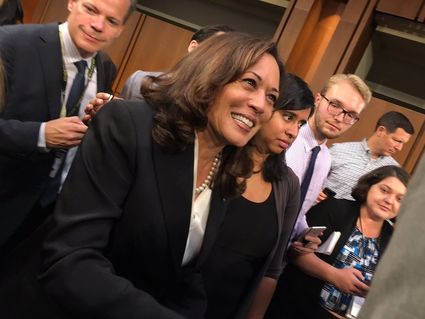 To the bemused Pompeo, Harris repeated the oft-recited fallacy that "97 percent" of climate scientists believe there is global warming caused by human activity.

The committee's issue with Harris and the other members of the "Green 20," a group of progressive attorney generals, was that they were using the power of their offices to subpoena "documents, communications, and research that would capture the work of more than 100 academic institutions, scientists, and nonprofit organizations." Most troubling to the committee was that most of those targeted had been chosen by one environmental activist organization's website.

Smith told Harris baldly that her "efforts to silence speech are based on political theater rather than legal or scientific arguments, and that they run counter to an attorney general's duty to serve as the 'guardian of the people.'"

It is of course unclear whether or not Senator Kamala Harris actually believes in climate change alarmism or the necessity (or ability) of the United States to do anything about it. What is crystal clear is that she sees the issue as a powerful weapon to rally her supporters, a symbol of her virtue, and an excuse to bulldoze civil rights.

In the 70's, it was acid rain. In the 80's, it was ozone depletion. In the 90's, it was global warming. Now, it's climate change. Funny how no one talks about acid rain or the ozone hole anymore. They keep re-branding this movement every time it's disproved. The ultimate goal of all this fake enviro-alarmism is to gather ALL global natural resources into the hands of a VERY few and to levy carbon taxes on every product and service you buy. Even a candy bar is made in a factory that uses natural resources and pollutes the atmosphere, which then must be transported to the store where you buy it on an evil truck spewing emissions into the atmosphere. CARBON TAX! See how easy that is? Hundreds of trillions of dollars stand to me made. They'll also ration things like electricity and the purchase of cars...but first, they have to convince you that the earth is dying. Wake up, people! Search: 18 spectacularly wrong predictions made around the time of the first Earth Day in 1970