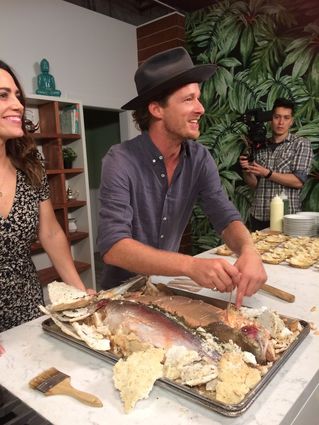 Australia's premier public, economic and cultural diplomacy program G'Day USA brought its Signature Experience event 'Bringing a Taste of Australia to the US' at Tastemade Studios to Santa Monica on Friday, January 25.

The centerpiece of the culinary evening was a gigantic show stopping tray of boiled shrimp just flown in from Australia.

Almost the size of lobster tails, they were some of the biggest you will ever see. Rounding out the offerings on the table were various Australian fish, crudo style.

Chef Turland lead several cooking demonstrations, mostly featuring fish. A highlight was a spectacular salmon baked in a salt crust which created a natural cavity helping the fish retain maximum moisture as it cooked. The fish came out tender and flaky, with delicate seasoning. Just in case you didn't get enough shrimp at the buffet table, you could also get it from the barbie, classic Aussie style. Lamb was also featured, and no, it wasn't from New Zealand. 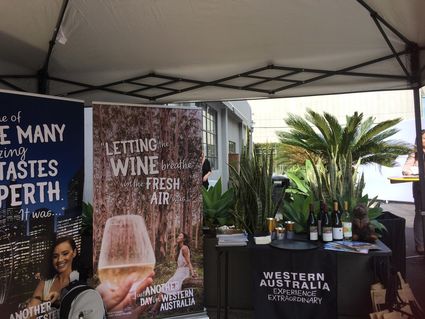 As homage to its Southern California location, the evening closed with the Aussie chef battling an American chef for the best tacos. The demo dishes were passed around for all to taste.

Over 300 high-level guests included Government officials, G'Day USA sponsors, and leading Australian and US business people, creatives and influencers, many of whom participated in other G'Day events. Notables included Ambassador Joe Hockey and Minister Pisoni and sponsors Thomas Food International and Wine Australia.

Guests were presented with gift bags of Australian products.

First launched in 2004,G'Day USA showcases Australia's creative and innovative society and vibrant economy to the United States to deepen the Australia-US relationship. Now its 16th year, it is one of the largest public diplomacy programs run by any country in the United States.