Toxic Masculinity: #Metoo Movement Demands Mural of Leda and The Swan be Reburied at Pompeii 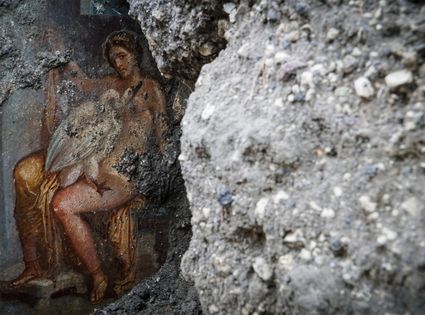 This particular depiction of Zeus in the form of a swan impregnating the queen of Sparta, Leda, "is a peculiar one," apologizes CNN.

The #MeToo Movement, or certain of its leaders, have demanded that archeologists rebury a "sexist and patriarchal" depiction of the mythological figure Leda and the Swan.

"The mural shows a dangerously outdated version of the power relationship between men and women. The lack of consent, while mythological, may be easily misinterpreted as women's positive response to unwanted sexual overtures. It needs to be back where it was for the last 19 centuries: #MeToo" tweeted Alyssa Milano.

From CNN: This particular Greek myth is a peculiar one. As legend has it, Leda was seduced -- some say raped -- and impregnated by a swan, who was really Zeus, the Olympian king of the gods who had taken a fancy to her. The encounter happened on the very same night Leda made love with her mortal husband King Thestius. The dual encounter, according to Greek mythology, led to the formation of two swan eggs and the subsequent birth of a number of children who were of mixed mortal and deity descent. Helen of Troy was the most famous offspring, but the union also produced Clytemnestra, Castor and Pollux.

Her gaze may have been obscured for almost two millennia, but visitors to Pompeii's vast archeological dig will soon be able to come eye to eye with Leda, Queen of Sparta, complete with the god Zeus in disguise as a swan, perched on her unclothed lap.

The provocative scene from ancient Greek mythology is depicted on a 13 by 18 inch bedroom wall mural. It was uncovered during maintenance work in the Regio V section of the archeological dig that is not currently open to the public. Of Pompeii's 66 hectares (163 acres), about a third have not yet been excavated after the 79 AD eruption of Mount Vesuvius.

It is thought that between 10,000 and 20,000 people lived in this decadent seaside enclave when the Vesuvius sprang to life after more than a thousand years of dormancy. No one has ever established a credible figure for how many perished.

The structural dynamic of the eruption, which first sent hot rocks out of the volcano's cone before a high column of ash fell onto the city, has preserved many of Pompeii's vast treasures, according to Francesco Muscolino, an architect for Italy's Culture Ministry, who works at the site. "The pyroclastic rocks are very dangerous when they are hot, but they contributed to the preservation of many ancient artifacts here, almost like packing material," he told CNN during a recent private tour of the area closed to the public. Had lava spewed from the volcano instead, everything would have been destroyed, he said.

What makes this mural so astonishing is both its incredibly well-preserved state and the way Leda is portrayed.

History made: In an astonishing Bronze Age discovery a 3000-year-old community has been unearthedThe legend has has been depicted by Leonardo da Vinci, Michelangelo and a host of renaissance masters. Modern artists like Cy Twombly have also tried to interpret it, and it has been written about in a variety of ways, perhaps the most famous in a haunting sonnet by William Butler Yeats.

For all the depictions, few actually agree on just who seduced whom, and whether it was a show of a man's sexual prowess and power, or a woman's weakness to ward off his advances, even when he was disguised as an animal. His neck is often portrayed as a phallic symbol and Leda's subtle smile is frequently described as a measure of her sexual pleasure brought on by being dominated. It may have been two thousand years before the #metoo movement, but the issues are hauntingly similar.

Explicit, but not uncommon

The fresco found in Pompeii is unique in that it shows Leda differently than she has been previously depicted, Pompeii's chief archeologist Massimo Osanna told CNN.

This is by no means the only example of an ancient penchant for what today would be considered sexually explicit.

Visitors to the house -- or even those glancing in as they passed by -- were first greeted by a fresco of Priapus, the god of fertility, weighing his exaggeratedly large phallus on a hand scale to show his might and masculinity.

"This was another time and a different society. It was not so strange to show a masculine phallus," Osanna explained. "The people of Pompeii used this imagery a lot. If you go in the baths, they are full of explicit sexual images. It was really a society where sex was not something to consume just in a private space. But it was before Christianity when the sense of sex was totally different."

Osanna believes that it likely belonged to a slave who had been freed and who had come into enough money to commission private paintings and wanted to use them to show his new power. He envisions a courtyard with pillars still buried under more than three meters of rocks and ash.

But it may take another generation before anything else is known about the living space or how it was decorated. The discovery was made during maintenance and not an active dig, and there is no immediate plan to start chipping away the layers to see what else is on the walls of this particular bedroom, as enticing as that might be.

Osanna says that in many cases, due to budget constraints and simple logistics like a shortage of on-site archeologists, the works are much better preserved under the layers of pyroclastic rock and ash than they would be out in the open where they are exposed to the elements and the wrath of mass tourism. 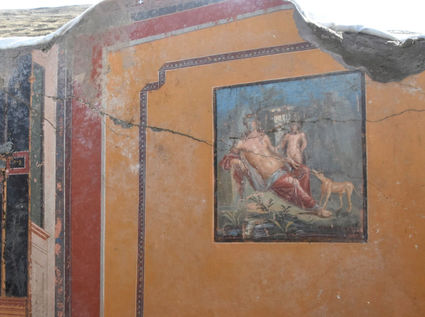 Photo of Pompeii fresco depicting Narcissus staring at his reflection, as Pan, in the form of a goat, tugs at his sleeve.

"It's important to know where it is necessary to dig, like here, where the research is important for conservation," he said. "In this part of Pompeii, it was important to partially excavate to better understand what is below, but in other parts it is important to leave it covered for the next generation."

He believes that future archeologists might have even better technology to get to the bottom of what's still buried under ancient Pompeii.

As for "Leda and the Swan," the maintenance work is expected to be finished in this section of Pompeii within a year, after which a roof will be erected and plexiglass installed to protect the ancient mural. Only then will tourists be allowed to come to their on conclusions about this ancient tale.

"To our contemporary eyes, Modigliani's hirsute women are hardly shocking, in fact their poses reveal the painter to be in thrall to elegance and classicism."